Now That’s What I Call Quite Good: Free Guy 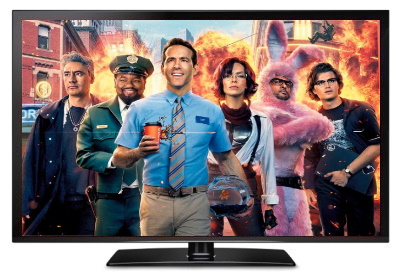 Ryan Reynolds’ Guy lives a life where every day seems the same as he says good morning to his goldfish, chirpily heads off to work and trots out the same catchphrase over and over again. This is no time loop comedy however as we quickly learn he’s just a non-playable character in an open world sandbox game akin to Grand Theft Auto that’s called Free City, and that’s why he doesn’t pay any attention to the helicopters blowing up things left, right and centre or that people are running around with rocket launches.

After noticing and becoming attracted to one of the human players, Molotovgirl (Jodie Comer, who yes, is about twenty years younger than Reynolds because Hollywood will sadly never change, it seems) he notices that anyone wearing sunglasses seems to be able to do whatever the hell they like and becomes intrigued, grabs some for himself and upon wearing them sees a whole new world of power ups, health boxes and everything else you might expect to see in a game.

There’s also a subplot where in the real world Millie is trying to prove that the makers of the game stole the code that she and Keys (Stranger Things’ Joe Keery) created and have sneakily incorporated it in to Free City. She believes she can find proof from within the game, while Keys works for said company and so can provide her with insider intel, but the big boss Antwan (Taika Waititi) is a twatty type who soon begins something strange is going on when Millie and Guy meet in the game and team up together, and bizarrely the whole world becomes fascinated when they notice Guy is being non-violent and heroic, as if that’s never happened in a game before.

It starts well and the initial thirty minutes or so has a lot of fun playing around with the concept of what life must be like in an ultra-violent video game, as Guy naively wanders around while mass murder surrounds him, and if he’s ever on the receiving end of a painful death he wakes up the next morning none the wiser. The problem is that when Guy dons the sunglasses and essentially becomes sentient, after about twenty minutes it changes from being a daft action flick to something similar to The Truman Show. Problematically Guy’s a little too perfect to be interesting, as he’s so kind and sweet natured, and the film reminds us about a hundred times as to how freaking handsome Reynolds is, and that element stops being funny really quickly.

When Millie and Guy bond and there’s a hint of romance in the air the film slows down to a lethargic level and at two hours is easily half an hour too long. If Guy had been a more nuanced character, or the dialogue had been better written, a lot of interesting ideas could have been explored but this is surface level stuff with some patronising moralising and an overall message that you’ll have heard many a time from Hollywood nonsense like this.

Visually it is pretty stunning, and that opening half hour really is a lot of fun, and the ending amused in places, but the script lacks depth and the performances just aren’t good enough. Taika Waititi plays it so over the top it’s exhausting whenever he’s on screen, and only Comer manages to make her character someone you’d care about. Predictable as hell, there’s a great movie to be made about a video game character becoming sentient, but this really isn’t it.