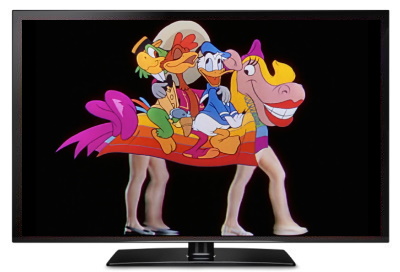 I’ve been working my way through every animated Disney theatrical release over the past few months and it’s a project that has thrown up quite a few surprises, I wasn’t expecting the mix of cgi and live action that is Dinosaur to be any good but it’s actually pretty decent fun, though on the flip side Sword In The Stone really is poor, once again proving that the legend of King Arthur is rarely adapted to the big screen with any level of success.

But this 1944 anthology movie was the biggest revelation, I’ve never really been a fan of Donald Duck so the fact that he was the host of the film and starred in certain segments meant it was something I put off watching for a fair old while. But it’s actually quite the unusual movie, at least in its second half when it decides to stop telling cute but little more than that stories and go rather crazy.

The premise is that Donald has been given a bunch of presents for his birthday, all of which are South American themed rather conveniently. Initially this sees Donald watching a couple of cartoons, one involving a penguin who doesn’t like the cold and so who travels somewhere warmer which while not exactly amazing is amusing enough, and the same applies with a story about a boy who discovers a flying donkey.

After this the film decides to stop being conventional however as Donald meets three different birds and heads off to South America in what becomes a mixture of live action film and animation. Bizarrely Donald is extremely aroused by some bikini clad women on the beach and chases them around in behaviour that in this day and age would see him named and shamed as a sex pest, but as this was made in the early nineteen forties they just about get away with it and it’s amusing instead.

Then there’s a couple of songs in the movie which feel like a bizarre psychedelic fever dream as Donald and his three pals are floating about and some of the flower-y imagery is extremely unusual, and which made me love this movie a great deal. The songs are cute as well, perhaps not exactly ear worms that you’ll find yourself humming for months afterwards but they work well within the context of the movie.

I have to admit that I had to put subtitles on to understand some of Donald’s idiocy and it’s a shame it wasn’t as insane as the ending is all the way through, but this really is quite the strange creation and one that has stayed with me over the last couple of weeks since I watched it. While enjoying watching many a Disney movie very few are of the variety that I’ll bother with them again during my life time, but I know I’ll definitely watch this again as I introduce its strangeness to others.