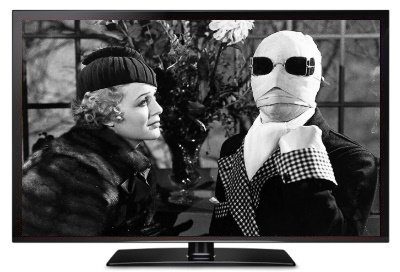 One of the most popular of the Universal horror films of the 1930’s I wasn’t expecting to review this before watching it but while there are certain parts which work as a thriller and a disturbing horror movie, it’s surprisingly funny as well. There’s a lot of black comedy in the film as the central character slowly loses his mind, and the dialogue between many of the supporting characters, particularly the police in the movie, is deliberately very funny.

If it was remade word for word and shot for shot now it might well be known as “The Invisible Bastard”, as boy is this fella a real shit. While it’s hinted that he was never the most humble of men after coming up with a serum to turn himself invisible there’s a side effect Jack Griffin (Claude Rains) didn’t expect, and that’s losing his mind and then some. At first as he tries to perfect a serum to turn himself visible again and he’s only surly and pushy, but then when kicked out of the room he’s working in he turns psychotic.

The film then flits between the police who are aware that Griffin’s no longer visible and are coming up with increasingly inventive ways of capturing the man, while Griffin has decided he wants to rule the world and is showing off just how powerful he is, often killing people with no motive at all, before he causes a train to crash killing everyone on board. There’s a fun montage of a radio report telling the public all about him and we get to see a number of panicked faces along with phone calls to the police suggesting how he might be caught, before the movie comes to a very satisfying ending.

Griffin’s various speeches as he celebrates his own genius are laugh out loud funny, the best being where he believes “Even the moon’s frightened of me”, while in a couple of scenes he wanders off singing gleefully post violence. The police has some sharp observations about this madness, and it’s an extremely tight, lean number without an ounce of flab, and watching Rains fuck about while invisible is never less than extremely entertaining.

The effects are impressive for their day, and it doesn’t outstay its welcome either. The body count is high but this being the nineteen thirties it’s of course not gory, but the violence is still often brutal and quite chilling. Rains only appears in the film briefly but vocally it’s a stunning performance, if misjudged this could easily have felt rather silly but instead he makes it a strange, unusual slice of disturbing absurdity, one moment amusing, the next impressively deranged.