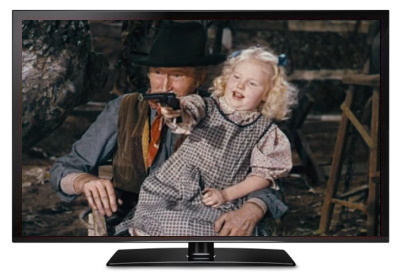 Preston Sturges is famous for making screwball comedies full of dry wit and daft slapstick, and to be fair The Beautiful Blonde From Bashful Bend does contain some elements of the above. But unfortunately it’s a bizarre mess as well, and all kinds of problematic with its treatment of a good number of its characters who have to either put up with racist abuse or who are mocked as they’re learning disabled.

Some might say it’s unfair to judge a film made in the late forties by today’s standards but Sturges was a director who previously had been congratulated for handling characters of different races with sensitivity, which he doesn’t really do here. Sometimes the joke is on the white character for saying a stupid thing, but only sometimes, and it’s a movie with too many cringeworthy moments for it to be something I could recommend.

It’s also a little predictable too, something which Sturges’ movies rarely suffer from, as the feisty Freddie Jones (Betty Grable) can’t keep her temper under control and when she believes her boyfriend Blackie (Cesar Romero, best known for playing the Joker in the Adam West Batman series) is cheating on her she tries to shoot him, with a contrived running gag being that whenever she does grab a gun the bullet always ends up in the buttocks of a local judge.

Due to this she leaves town with her best friend Conchita (Olga San Juan) who is the subject of far too many white men believing her to be a Native American and hitting on her, at one point the train conductor offers to show her “White Man’s choo choo puff puff engine” and a woman in another scene says “She’s quite bright for an Indian isn’t she?”, and sure, Conchita’s a quick witted type and hits back with a funny insult, but it’s still something which is unpleasant to witness.

Once on the train Conchita explains she’s stolen the luggage from a dead woman, and Freddie has to pretend to be the new school teacher in Bashford Bend while Conchita will be her assistant. There we meet a number of quite unusual individuals, including potential love interest Charlie (Rudy Vallee), Mr. Jorgensen (El Brendel, whose 1930 film Just Imagine I’m a big fan of, but who once again plays a “Comedy foreigner”) and also angry bastard Gus Basserman (Richard Hale) and his two teenage sons who are clearly learning disabled, though depressingly the film just mocks them from start to finish.

Freddie gets away with pretending to be a school teacher for a little while, even though she has to threaten the Basserman brothers with a gun to get them to fall in line and humiliates them in a very violent and unpleasant scene, but when Blackie arrives in town Freddie believes he’s there to pick up the award the Judge has put up for her arrest, and gets the two brothers to try and kill him with a massive stone. Unfortunately it only knocks him out, and soon Blackie is shooting at both of the Basserman boys (Danny Jackson and Sterling Holloway, with the latter going on to voice many a famous Disney character), and it looks like he’s killed them too.

It’s a mess of a film for so many reasons and it’s surprising to see a director like Preston Sturges turn in such a shambles. As well as the mockery of anyone who isn’t American, the slapstick is too contrived a lot of the time and the way the Judge keeps on getting shot is ridiculous, but not in a funny manner. The way Freddie manipulates the two Basserman brothers is troubling and exploitative, and there’s a fair dose of sexism in the way the men treat any women who cross their paths.

It’s not all bad, the friendship between Freddie and Conchita is appealing and the way they won’t let men walk all over them often leads to a good few funny lines. There’s also a bizarre yet amusing scene right at the beginning when a very, very young Freddie is being taught how to shoot a gun, and is given the advice to pull the trigger “Like you’re squeezing a sockful of dead mice”, which is an image I doubt I’ll ever forget. Betty Grable and Cesar Romero’s chemistry is fairly strong as well, and some of their bickering led to a laugh or two, while the way the Judge shrieks in pain is quite the amusing sound.

Unfortunately none of the above is enough to save this from being at the very best a misjudged curiosity. In Sullivan’s Travels Sturges treated the poor with respect but the opposite applies here, the sexism and racism is unpleasant to see, and a lot of the physical comedy is quite tired and lacks the inventive playfulness of Sturges at his best. I only stuck with it due to wanting to see everything that he’s made, and even then struggled to make it to the end, and this really is for Sturges’ completists only.