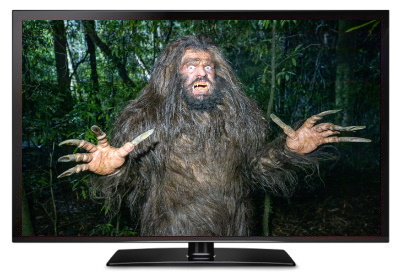 Wellington Paranormal Series 3 Episode 1 and 2
The first series of this What We Do In The Shadows spin-off was a little patchy but the second was a big step up and it became joyfully daft stuff. Judging by these two episodes they’ve managed to maintain the quality thankfully, sometimes it’s quite a low budget affair but they still generate a lot of laughs, as with the first episode which featured an invisible monster and so there was lost of strong physical comedy with our heroes Officer Minogue (Mike Minogue), Officer O’Leary (Karen O’Leary) and Sgt. Maaka (Maaka Pohatu) lurching around like lunatics as they tried to arrest it. Fairly new addition to the cast Officer Parker (Tom Sainsbury) is great too, while the pay off was surprisingly sweet and so a curveball I wasn’t expecting at all. The second episode of the third series wasn’t quite as good if only because Rhys Darby reprised his role from What We Do In The Shadows though his werewolf character Anton is now a park ranger, and the issue was that he just wasn’t in it enough, it felt odd to bring him back and then only occasionally see him. Still, seeing O’Leary and Minogue accidentally ingest hallucinogenic mushrooms was a fun plot line (the highlight being their dancing with glow sticks) and the monster of the week turned out to be yet another inventive creation making the episode nicely unpredictable once again. ★★★★

Solar Opposites Season Two
I’m really not quite sure what to make of Solar Opposites, sometimes it’s a show that I enjoy a good deal, some times it feels like a rejected Rick and Morty script what with the way Korvo is essentially an alien version of Rick who’s able to create all manner of technological wonders to serve the plot, and it’s an ultra violent and often ultra cynical affair. And I’m not particularly fond of the hedonistic Terry either, and not just because he’s voiced by Thomas Middleditch who we’ve now discovered is a deeply unpleasant human being. Yet at times it can be a show that entertains a great deal, the miniature human society that exists in their house thanks to Yumulack shrinking anyone he dislikes has been an enormously entertaining aspect of the show, but that’s sometimes to its detriment as when there’s an episode where they aren’t present, such as the time travel packed idiocy of the third episode, I find myself wishing that we were following that plot line instead of the one we got. That time travel episode was the series at a low point too as it largely featured Terry and Korvo being annoying, but at least the majority of the second season was better than the first, Jesse and Yumulack had a few fun plotlines, the Pupa was allowed to develop and be pleasingly weird, and even though the finale was Wall-less I still found myself enjoying it a great deal. It has been renewed for a third season already but if it does return I hope Justin Roiland and co a) recast Terry, b) feature the wall in every episode, and c) make it less like Rick and Morty, and then they might have a show which is a must watch on their hands, as it is right now it’s a series i watched as I have way too much time on my hands and outside of a pandemic don’t know if I’d stick with. A generous. ★★★1/2

This Time With Alan Partridge Series 2 Episode 1
Back on our screens for a second series this most recent Alan Partridge had a very strong first series and the first of the second continues in that vein. In some ways it might be a little too similar to what we saw before, what with Alan and co-host Jenny’s relationship being professional but slightly frosty, Tim Key’s Simon once again fucked up his attempts at interacting with the viewers and Lolly Adefope’s Rosie and Alan verbally sparred in a predictable manner akin to every episode from the previous series, but hopefully they’ll shake it up over time and there was still a hell of a lot to enjoy here, a film where Alan visited some monks being prime Partridge and the show at its best, and the way he was caught off guard by Jenny’s boyfriend proposing (a wonderfully smug Simon Farnaby) and struggling to make a final sequence emotive as he reunited too long lost brothers was fantastic comedy. ★★★★

The Pirate
Gene Kelly and Judy Garland star in this Vincente Minnelli musical which has songs by Cole Porter, and given the involvement of all four you’d think it would be a classic, but that’s very much not the case. Judy Garland’s young twentysomething Emmanuella is being married off by her mother to the overweight old man Don Pedro for financial reasons and naturally she’s not exactly happy about this, but then life gets more complicated when she’s hypnotised by a very dodgy actor played by Gene Kelly who then kisses her while in such a state, because sexual assault used to be quite the popular thing in the nineteen forties it seems. Then a short time later he pretends to be a pirate that she fancies, even though secretly Don Pedro used to be the said sea based bastard, but that backfires inevitably as this tepid farce goes on for far too long. Due to the amount of lies Kelly tells it’s very dubious romance wise, but when poor old Judy finds out the truth it doesn’t take long for her to be in love with the man, even if that doesn’t make much sense at all. Even more annoyingly is the lack of songs as there’s only two in the first hour, a long fantasy sequence is bland, and though it’s fun to see Garland destroy the set as she throws everything and anything at Kelly at one point, it’s soon followed by a song where she claims “You Can Do No Wrong” which is confusing and then some given how duplicitous Kelly’s been throughout the film, and it’s a rather drab ballad too. There’s a couple more songs in the final half hour but again they’re fairly nothing-y, and this is a rare example of a musical that I regret watching and I couldn’t wait for it to be over. ★★

Video Of The Week
Pitchin’ Impossible invites people to talk about the show they’d like to make, with this episode featuring Maria Bamford, and her suggestion of “Never-Ending Suffering, Live!” is a fantastic one, with the video being a mixture of her talking about it and an animated take on what the show would be like, and it’s the Bammer, so of course it’s amazing. https://www.youtube.com/watch?v=KB2vhwqrmkI

Link Of The Week
Famously reclusive The Simpsons writer John Swartzwelder gave a rare interview with The New Yorker recently, and during it he touched upon some early work he did for Army Man magazine, a fanzine style affair which only lasted three issues but which can be found here and is a hilarious read: https://armymans.tumblr.com/