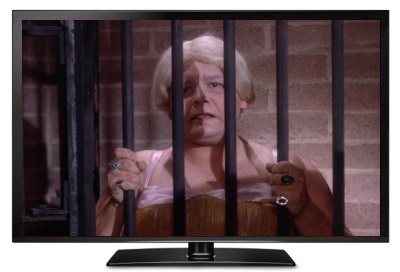 I’m very fond of the work of the work of Nicolas Winding Refn, the Danish director of Drive, Bronson and The Neon Demon, and so when I heard he’d overseen the restoration of this sixties comedy from R.L. Frost that supposedly featured Dracula, Frankenstein and The Wolfman I was looking forward to immensely. It’s a shockingly dodgy affair though, and one which largely uses its bizarre plotline to have a cast of about twenty women either naked or topless.

I can vaguely understand the appeal of the movie to Refn though, and why he was involved in bringing it to a larger audience in the twenty first century. There’s no doubt that it’s an exploitation movie and clearly made to cash in on anyone who wanted to see a ridiculous amount of nudity in the nineteen sixties, but it is often bizarrely funny, and if you can ignore the grotesque sexism on display it provides a fair amount of laughs.

Set in an exclusive school run by Granny Good (Bob Cresse), her students spend most of the film finding an excuse to be topless, and Good’s also running an alcohol distillery in the basement and making a monosyllabic wolfman called Krakow (William Engesser) work for her for just thirteen cents a day. Early on we’re also introduced to Prudence (Laura Eden), a new student who is up to something as she sneaks around the place, though what she’s looking for isn’t explained and this storyline is often forgotten and only really links the start of the film to its end, as it is a film that rarely cares about plot and the majority of the time it just follows the women as they go about their daily business.

A lot of that is showering, and lordy does that get dull quickly, but sometimes Granny narrates events in an amusingly wry manner. One woman spends a most of the movie reading the dictionary because, er, I guess that saved time when it came to writing the script, but it’s a running gag with a strong pay off, and there’s also an art class where the women draw Granny and their efforts are deliberately hilariously bad. Occasionally Granny fills us in on a character’s back story and though the puns are terrible they sometimes made me laugh, like how Granny claims that Sandra came from a broken home as “Her house slid off a cliff and cracked right in two”, while Krakow has an identical twin at the party at the end of the movie who’s surprisingly well spoken and no one seems shocked by his appearance.

On the Dracula and Frankenstein front director Frost and writer Denver Scott have pulled a fast one on the audience as the party at the end is a fancy dress one, and so two people go as Dracula and Frankenstein, but they’re not the famous supernatural characters at all. Which is a shame really, if this had doubled down on the daftness and featured the much loved vampire and his undead pal getting on down and having a dance it would have been even funnier than it is.

This could have just been a tacky exploitation movie so it deserves some minor kudos for the effort that’s been put in to the script, the Benny Hill-esque performance from Bob Cresse as Granny Good, and that the nudity is of the topless variety and there aren’t any genitalia on display. It is undoubtedly a really odd movie, and even though it is only an hour long if you cut out all of the truly pointless scenes it’d be about half that, yet it is just about worth checking out if you’re in the mood for a weird and strangely amusing picture.