Now That’s What I Call Quite Good: The Sin Of Harold Diddlebock 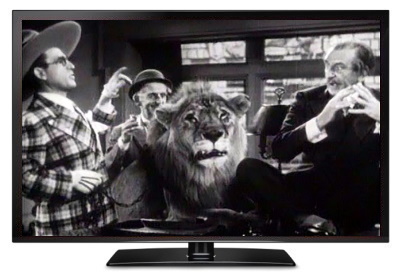 Harold Lloyd retired from moving making in 1938 but nine years later Preston Sturges persuaded him to return to the big screen, writing the role especially for him and promising the star that he could direct part of it. That didn’t take place in the end and apparently because of Sturges letting Lloyd down the filming was a fractious process and the film was a flop upon release, to the extent that producer Howard Hughes pulled it from release, reshot some scenes and edited it down to 76 minutes and then released it under the title “Mad Wednesday”, but it still failed to appeal to audiences.

Given all that you’d imagine the film was something of a disaster, but that isn’t actually the case at all. Not all of it works and there’s one sequence which is a little dodgy, but most of the time it’s an extremely amiable affair with a fantastic central performance from Harold Lloyd. The concept is quite an original one too as the film begins with nine minutes of Lloyd’s 1925 hit The Freshman, where Lloyd plays American Football incredibly badly but manages to score the winning touchdown. That catches the eye of pompous business man J.E. Waggleberry (Raymond Walburn) who offers Harold a job, which apparently he does all of the time when he’s seen someone who very briefly impresses him, and Harold takes him up on the offer. But twenty two years he’s still working in the same lowly position, and Waggleberry is unimpressed by his laziness and so fires him. Before he leaves he tells office girl Miss Otis about how he had fallen in love with seven of her sisters, all of whom had worked in the office but who Harold had failed to propose to for various reasons, in a sequence which is absurd for sure but very, very funny, before he gives her a ring so that if she’s ever in love with a man with no money he’ll have no excuse not to marry her, and if you’ve suddenly just guessed the ending, well, you’re more than half way there.

Dejected from having lost his job and struggling with the sentiment that he’s wasted his life, when a dodgy type called Wormy (Jimmy Conlin) begs him for money Harold eventually gives in, and when Wormy learns that Harold has never had an alcoholic drink in his life he drags him off to a nearby bar. The barman’s also excited by the news that Harold is going to sample alcohol for the first time and so creates a special cocktail for him, and soon Harold is very drunk indeed and screaming like a wild banshee. That’s not an exaggeration either, the screeching noise he emits is a very odd but funny noise, made all the funnier by the fact that Harold has no idea he’s making it and is wondering where it comes from. A policeman investigates the noise and warns the bartender “You better remember what you put in that so it doesn’t happen again”, and then Harold is off on an adventure where he buys a hideous new suit and bets a thousand pounds on a horse which surely can’t win due to the long odds, but amazingly does. Brief scenes of Harold partying follow, then the next thing we know he’s waking up hungover on his sister’s couch.

Upon doing so he realises that has lost all of his money, but it’s a little more complicated than that as over the course of the day he discovers he’s bought a circus which comes with thirty seven lions, fourteen tigers, seven bears, some jaguars and a puma, and a whole load of employees who haven’t been paid in months. Understandably desperate to offload the circus initially Harold can’t find anyone who will buy it, until he hits upon an idea that involves suggesting that the circus could benefit the reputation of much hated bankers, and takes one of the lions around with him as he makes his business proposition.

It’s here that the film includes that aforementioned rather dodgy scene, as said lion is dragged from location to location looking rather surly and annoyed. Worse still is a long set piece influenced by Lloyd’s 1923 hit Safety Last where Harold ends up on a window ledge with the lion, and both of their lives look likely to end rather soon. It’s an odd sequence which is more distressing than funny, and I can’t help but feel that it wouldn’t be made today without a boat load of cgi as the poor lion is shoved about all over the place and looks very unhappy indeed.

Apart from this it’s a quite charming film with some strong dialogue and unpredictably silliness, a visit to a “The Kitty Pooh Home For Hungry Cats” when Harold is trying to offload the animals is a highlight, as is his meeting with various circus types including a very forthright bearded lady, and it’s a shame this scene isn’t longer. Lloyd is superb when acting drunk and all of the scenes where he’s under the influence are very funny, and apart from the window ledge scene the parts with the lion are mostly amusing too.

It really is an enormous shame that the film was such a flop and that Lloyd never acted again, not that Sturges deserves any blame as the film star had of course already retired, but this shows just how strong a comic actor he is, and how much he still had to offer the silver screen. The same applies with Sturges too, when this flopped and then the following year’s Unfaithfully Yours did badly it severely damaged his career, and as with Lloyd it’s not only underserved but unfair as he’s one of the most unique voices in film comedy of the era.