Now That’s What I Call Quite Good: Never Give A Sucker An Even Break 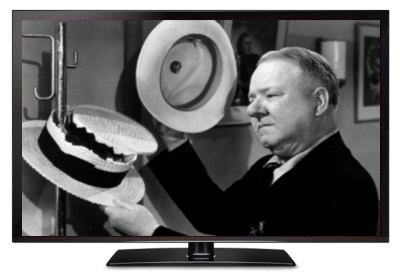 1941 was quite the year for comedy films, what with Hellzapoppin’, The Lady Eve and Sullivan’s Travels, and it was also notable for the being the last year that W.C. Fields had a starring role in a film. That’s largely due to illness and alcohol abuse, but partially because he’d fallen out with Paramount who were not happy in the slightest when he turned in this film, and ended up reshooting and recutting it and releasing it on the quiet.

Possibly due to their interference it’s something of a mess, though what the original was like is frustratingly unknown as Fields’ version has never been released and my #ReleaseTheFieldsCut was all but ignored. What we’ve been left with is a strange hodgepodge, a film which feels more like a collection of sketches than a cohesive whole, and it is one which is patchy in the extreme, at times very funny but on other occasions somewhat lacking in decent gags.

The first quarter is the film at its weakest as Fields bickers with a waitress and wanders around a film studio, while his niece Gloria (Gloria Jean) is rehearsing with a director and singing a fair bit, with the former getting annoyed with those around him. There’s the odd okay line or scene but it’s rather dull for far too often, and it feels like a completely different film when Fields has a meeting with a film producer (Franklin Pangborn) and gives him his latest script, and as Pangborn reads it we see it play out on screen.

Initially set on an airplane with Fields and Grace travelling to an unknown destination, at first it’s an excuse for some minor slapstick involving an overweight Russian and some minor word play, the best line being “Did you travel as one person or did you get a party rate of ten?”, though Fields has some cheek given his own weight problem. Most of this part of the film sees Fields insulting someone and then mumbling something else under his breath, but after nipping out to the airplane’s sun deck, because yes, it is that daft an affair, Fields accidentally knocks his bottle of alcohol out of the window and so jumps out after it.

It’s here that the film finds its stride as Fields fortunately lands in a large bed in the garden of a house on top of a mountain, and rather than dying he bounces up and down on it for a bit. He then meets the daughter of the owner, who has never met a man before, and invents a kissing game called squidgulum, before meeting the mother and running away because she’s not young and beautiful like her daughter and only two years younger than Fields, so to him she is of course horrendously repugnant. Well, that’s the case until Fields learns that she’s rich at least, once he does he rushes back to propose.

Every so often there’s a break in the story for Pangborn to act appalled by how awful he thinks the script is, only to then read it again once more to find out what happened next, though we never get to see how Fields’ script actually ended as Pangborn can’t be arsed to finish it at the end. Then there’s two final scenes, one rather dull one with a bit of idiocy in an ice cream parlour, and one superb one where Fields gives a woman a lift to a maternity ward and it’s full of near misses, crashes, sped up footage and all round silliness which is a very fun way to end the film.

If it was more consistent than this could have been something really rather special, but the quality is all over the place, which may or may not be due to it being re-edited. Fields wrote the original story (under the pseudonym Otis Criblecoblis) as a satire of Hollywood but bar some minor mockery of Pangborn’s producer and the part of Gloria rehearsing at the beginning it’s lacking on that front, unless you consider the plot’s lack of coherence to be intentional, but again it’s impossible to know whether or not that was to be the case.

Fields was at least more than happy to mock himself, and there’s a few very knowing lines about his alcohol abuse (with “He didn’t get that nose from playing ping-pong” being my favourite line on the subject), and the slapstick is pretty decent in the movie, with scenes involving a gorilla on the mountain (albeit a man in an obvious gorilla suit) being rather funny. Gloria Jean is more than game and is a great straight woman to a lot of Fields absurd monkey business, and the rest of the cast are largely decent as well.

Alas due to the first quarter of the film being rather weak this is something which now feels like an odd curiosity than a bona fide classic. Perhaps I’m being too harsh on it, and it is considered a much loved movie by some so your mileage may vary, but there’s just too many rather bland moments in it for it to be something I can wholeheartedly recommend, and though Fields delivers some cute wordplay and a few funny pratfalls it’s definitely not his finest work.

Related Link:
You can watch Never Give A Sucker An Even Break in full on youtube here.