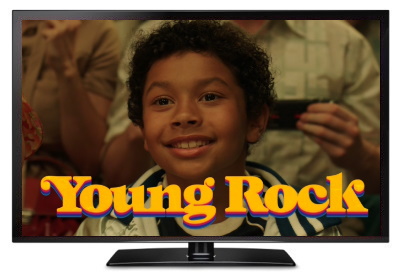 Back in 2017 the unpopular sitcom “Me, Myself & I” played with the idea of seeing the same character at three different points in his life, and now Young Rock is vaguely doing the same thing except that we get to discover what Dwayne Johnson was like at three different times in his youth, and then in his late fifties. The latter sees Johnson playing an older version of himself where he’s being interviewed by Randall Park about his running for president, and where he’s talking about his upbringing so that people are able to understand him better.

There’s something horribly smug about the whole endeavour though, Park is great as the interviewer and comes out with some decent lines, but The Rock himself boasts a great deal, starting off early on with the comment “I have had one hell of a life. But I I wasn’t born in to it, I’ve had to work very hard for everything that’s come my way” and while I’m sure that’s the case there’s no hint of modesty here and he comes across as quite arrogant, to the extent that while I used to like him as an actor a great deal this has put me off him a fair amount.

Separated in to four parts, it uses the interview as a framing device and then skips around his youth, showing us Dwayne at aged ten (Adrian Groulx), fifteen (Bradley Constant) and eighteen (Uli Latukefu). This opening episode is mostly about his relationship with his father Rocky (Joseph Lee Anderson), a once famous wrestler himself who was loving but also unreliable, and his mother (Stacey Leilua) who had to make excuses for her husband’s inability to see through the promises he made.

There’s also a fair amount of nonsense about “Working the gimmick”, which ties in with his father’s wrestling career and how they had to maintain a certain level of fakery so that fans never knew that he actually was close friends with those he wrestled, and it’s something that Dwayne adopts as a personal motto himself. In the scenes where he’s ten year’s old there’s the odd amusing moment, and Matthew Willig is pretty great as the sadly no longer with us André the Giant, while Leilua is strong as his mother, but this is the only time a version of Dwayne comes across as likeable in the episode.

The parts where he’s fifteen and eighteen are a lot, lot less successful frustratingly, and once again devoted to celebrating the Rock’s supposed all round amazingness. Yes, he steals at one point but this is joked about in a bland manner, and when he’s fifteen he’s already learning about the importance of family from a weird homeless guy in some really on the nose moralising, and at eighteen there’s a painfully tedious bit where he lifts weights and everyone stands around blown away by this fantastic feat.

Far too often this leans in to telling a story about just how fucking amazing The Rock is, there’s occasional hints of modesty but it’s not long before the show shows him in a tediously positive light. After buying his first car he boasts about one day buying his mother a red Cadillac, and then shortly afterwards we’re shown photos of him doing just that because it really can’t resist going on and on about how incredible Johnson is, to the extent that the series feels like a very pompous and vain work, he’s a character who is very, very rarely self-deprecating and that becomes a huge issue after a while.

Shot in a number of different locations and with a pretty huge cast it’s clear that a lot of money has been spent on the show, but unless you want to watch a sitcom that constantly shows us just how incredible the lead character is then it’ll be something you’ll struggle with. There’s the odd funny line and Park is easily the best thing about the show, but unless it changes a great deal and stops bragging about how purportedly astonishing Dwayne Johnson is then it’s never going to be something that is particularly watchable.