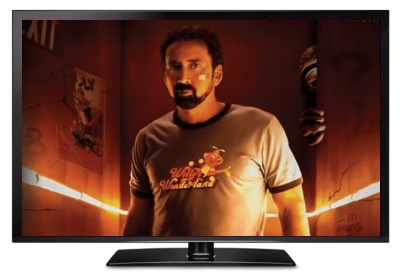 If you manage to get Nicolas Cage to sign on for your film about a group of animatronic animals who are mysteriously murderous, with the right script you should have a big cult hit on your hands. Cage is much loved by b-movie aficionados and is often an absolute delight when he hams it up no end and makes the film hilarious to watch, as Mom and Dad and Drive Crazy proved.

So it really is odd that director Kevin Lewis and writer G.O. Parsons have managed to produce a film which is incredibly boring, it takes the ingredients of what could be a much loved slice of ridiculousness and makes them blander than bland. Making absolute no use of Cage’s skills as an actor he stays mute throughout the whole film apart from the occasional grunt, and the character is impossible to sympathise with as we know nothing about him or why he acts in the way that he does.

Only referred to as “The Janitor”, Cage ends up working overnight at an old restaurant after his car tires are punctured, with the owner of Willy’s Wonderland promising him brand new ones if he cleans the place up. Meanwhile a bunch of kids led by Liv (Emily Tosta) want to burn the place down to the ground but the Sheriff (Beth Grant) won’t let them, and it’s eventually revealed that Willy’s Wonderland used to be owned by a serial killer and his pals who thanks to a satanic sacrifice now possess Willy and the other animatronic creations, and to prevent them from killing locals the Sheriff and others organise it so that they regularly get to murder people passing through the town.

It’s a film which should have been enormous fun but it fails on almost every level. The human sized animatronics look poor and more like weird cosplayers, the dialogue they come out with is groanworthy rather than funny, and the songs they sing are irritating rather than amusing. Worst of all is how banal Cage’s character is though, emotionless and almost comatose he’s meant to seem quirky what with the way he’s obsessed with energy drinks and doesn’t seem to be even vaguely bothered that the machines are trying to kill him, but after he’s far too easily dispatched one of them he weirdly goes back to either cleaning the place up or playing some pinball and it makes no sense at all.

I’ve a soft spot for daft slasher fare and am very forgiving when it comes to the genre, but this is one of the worst examples of throwaway, supposedly humourous horror that I’ve ever witnessed. The quite frankly astonishingly poor script fails to generate any amusing moments, there’s not a hint of tension within the entire film, the direction is often actively frustrating, and the fact that it wastes Nicolas Cage and never gives him a chance to go crazy is unforgivable, all of which makes it one of the worst films I’ve seen.