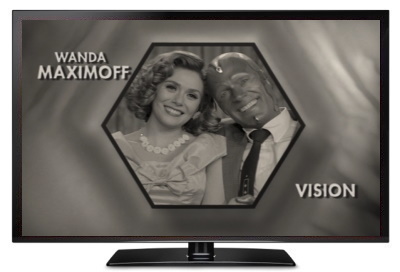 The last time we saw Vision (Paul Bettany) in the Marvel Universe he was rather sadly deceased, which made the announcement that he was to get his own tv series co-starring Elizabeth Olsen’s Wanda a tad confusing to most. In this opening episode people will still be left in the same state as how he’s still alive and what the hell is happening is not revealed, and it is a pastiche of nineteen fifties sitcoms from start to finish, shot in black and white and complete with a studio audience laughing along.

Vision and Wanda still have their powers and so there’s lots of jokes about Vision being a sentient computer without a skeleton and Wanda moving things with the power of her mind, but otherwise this is the kind of plot you’ll have seen in a good few sitcoms from many decades ago, where the boss comes to dinner and farce ensues. The dialogue is full of slang from the fifties and if it wasn’t for the dinner party scene towards the end you could quite probably trick someone somehow unaware of the Marvel Universe in to thinking this was a long lost sitcom from sixty or seventy years ago.

All of which is of course the point, and they’ve pulled it off with aplomb, while also occasionally throwing in a tiny element of satire of those sort of shows. So there’s a few observations about relationships, marriage and the workplace of that time joked about every so often, but most of the time it’s just a daft farce, the best of which features Wanda and Vision finding ways to distract his boss Arthur Hart (Fred Melamed) and Arthur’s wife (Debra Jo Rupp) from realising they’re super powered types who haven’t prepared the meal he’s supposed to be eating that night.

In the very, very final few seconds of the show there’s a burst of colour but it doesn’t give us any answers, but I’m sure it won’t be long before it’s revealed what exactly is going on. The slight moment of horror when Arthur chokes during the dinner hints at a darker future for the series as well, which clearly was never going to just stay as a mockery of very old sitcoms during the rest of its run.

It is an impressively strong start to the show, and I’m fascinated to see how it will develop. It boasts a superb cast, as well as those mentioned Katherine Hahn is especially good as their next door neighbour, and Paul Bettany and Elizabeth Olsen both get there fair share of very funny moments which highlight just how great their comic talents are. If you know nothing about the Marvel Universe than this probably won’t be the series which will get you on board, but for everyone else it’s looking like it’ll be quite the delight.