One And Done: Hey Neighbor 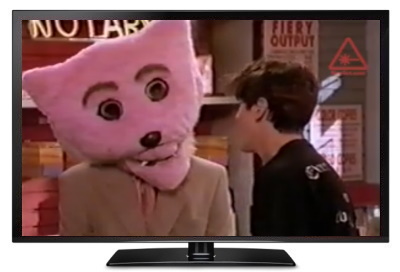 This sitcom parody was written by and starred Reno 911!’s Thomas Lennon, Robert Ben Garant, and Kerri Kenney-Silver, along with Michael Ian Black, and right at the beginning it’s explained that six actors will play eighteen characters, and so “Do not adjust your verticle hold or “whack” the side of your set. It’s supposed to be like this”. It’s less disorientating than you might think however, as most of the time they all play one character each and then one other lurking in the background, or who has a supporting role in only a single other scene.

Plotwise the idea is that after witnessing a Mafia murder Michael Ian Black and Julia Campbell are forced to move to the small town of Elwood by the Federal Witness Relocation Program, and given the new names Doug and Tammy Johnson. Doug used to be a highly regarded arts critic but now he’s working in a copy shop and forced to wear a ridiculous cat costume, while Tammy gets to teach at the local high school but only because its principal is something of a pervert who clearly fancies her and who fires the previous English teacher just so she can have a job there.

It’s a fish out of water comedy then, as “Doug” and “Tammy” struggle with their new lives, Doug is seemingly an optimist who will do his best whatever the circumstances but is constantly insulted by his teenage boss who demands to be called Mr Peterson (Jack Plotnick) and mocks Doug for his generation’s blow use and love for “A Flock Of Seagulls”. Meanwhile Tammy has to put up with students who boast about giving oral sex to each other and when she tells them they don’t have to ask for permission to use the toilet they all leave en masse.

Worst still is their neighbours Rob (Thomas Lennon) and Kitty (Kerri Kenney) are brash, loud and often racist, constantly invading their home without permission while Kitty all but forces them to join her Jazz-nastics class and dance / exercise in a ridiculous manner, screaming at them when they stop even for a second. Hoping to cheer Tammy up Doug takes her to the local Greek restaurant, but the head waiter (Robert Ben Garrant) smashes plates over Doug’s head, sexually assaults Tammy, dumps the corpses of two goats on their table and soon the chef is on fire, so they don’t stick around for long.

Surprisingly given the talent involved in the making of this show it’s only quite good. It has a very broad, very network sitcom feel to it, and lacks the subtlety that’s often found in their work, and it’s too loud, too obnoxious and even a little bit exhausting. Reno 911! was often gloriously absurd and unpredictable but that rarely applies here, and they don’t make that great a use of the idea of having the cast take on multiple roles either, with only Michael Ian Black’s pregnant female student notably amusing.

Given all of that, it’s definitely no bad thing that this wasn’t picked up and given a full series. Perhaps it would have developed in to something more interesting over time, at least if it had parodied sitcom conventions in a more unusual manner, but considering everything that all of the cast went on to do afterwards, I doubt anyone involved is particularly bitter or angry that this remained an unaired pilot.