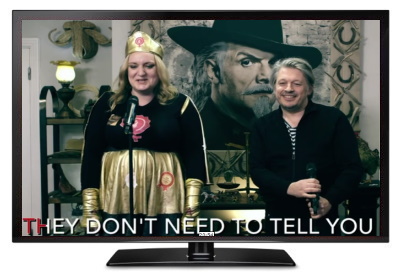 Taskmaster UK Series 10 Episode 10
I’ve largely been fond of this latest series of Taskmaster but the last couple of episodes have disappointed if only because there’s been far too many tasks of a physical nature which hasn’t given the contestants the chance to be inventive or do anything unusual. Take the put the wellies on the spider task for instance, which mostly saw them run about a lot in a very dull manner indeed, Katherine Parkinson being a bit weird and Johnny Vegas’s overly emotional responses were amusing at least but the other three were shockingly bland. The undress a large doll was weak too, it came as a massive disappointment that the final pre-recorded task was such a painfully dull one, and I’m surprised it was used in the series at all, let alone the final episode where you’d hope they’d try to go out with a bang. The karaoke task was fun in a cringeworthy watching your parents dance kind of way, but the episode as a whole was a let down, and only saved by Greg and Alex in the studio being on fantastic form. It’s still a series I’m extremely fond of, but I just hope that they cut back on the physical tasks in the next series 11, and have more that allow the contestants to be imaginative. ★★★3/4

Suurmestari (Taskmaster Finland)
The Finnish version of Taskmaster largely follows the standard format albeit with one slight difference, in that they only have four regular contestants but then one guest star each week. I’ve no idea why, and it certainly doesn’t add a great deal to this opening episode as guest star Mikko Leppilampi was a handsome actor type who largely did everything in the most logical manner, but who was also mostly boring. The other contestants weren’t a huge amount better either though, Jukka Hilden from the Finnish version of Jackass, and also possibly a scarecrow, was quite irritating and full of himself, comedian and magician and part time young John Thomson impersonator Janne Kataja was okay at the tasks but dull in the studio, Youtuber Roni Back had his moments but only a couple, and the only contestant I was really fond of was tv presenter Jenni Poikelus as she was either really rubbish or attempted to take on the task in an inspired manner. Their Greg is a guy called Jaakko Saariluoma who offered up very little amusement, while their Alex Horne was a woman called Pilvi Hamalainen, who was very stern and no nonsense, which led to the odd funny moment but not many. The tasks were a selection from the UK version (Collect The Most Tears, Place Yoga Balls On A Hill, Roll A Pea On A Carpet) but most of the time no one did anything that interesting, and as you might have guessed I didn’t click with this take on the show, so won’t be watching any more of it, at least until a potential second series and new contestants. ★★3/4

Stormester (Taskmaster Denmark) Series 1 Episode 1
The Danish version of Taskmaster is currently on its third series but as I don’t speak the language I’ve not previously seen it, but thanks to someone on Reddit uploading a copy of it with English subtitles I’ve now been able to view the first ever episode. It’s slightly different in that with the prize task we see one contestant offer up their gift (in this case a wedding ring), while the Taskmaster house backs on to a horse racing track which is used in some of the tasks in the episode, but overwise it’s business as usual. On the contestant front as with the UK version all were comedians, and apart from the slightly smug Nikolaj Stokholm I was fond of them all, with Lina Rafn, Christian Fuhlendorff, Julie Olgaard and Ruben Søltoft offering up some fun responses to the tasks and happy to either blatantly cheat or try and come up with imaginative solutions most of the time. Their version of Greg and Alex, Lasse and Mark respectively, were strong too, though Mark should have been harsher when it came to scoring, but hopefully that’ll develop over time. As with the Finnish episode the tasks were ones used in the UK series (Sneeze As Quickly As You Can, Do Something Backwards Impressively, Throw A Teabag In To A Mug) and competently carried out, and I especially liked the introduction of a young girl called Karma who was brought out to make a contestant feel guilty about lying, that kind of playfulness is definitely what the series benefits from, and if someone uploads the rest of the series with decent subtitles I’ll definitely watch it. ★★★ 1/4

Taskmaster New Zealand Series 1 Episodes 8 and 9
I’ve already reviewed this a couple of times but am doing so again because it’s such a joy, it started off slowly but really found its footing and for my money is the best version after the UK by far, indeed this first series has been so good that I’ve enjoyed it more than any of the recent UK series, and it’s up their with the UK’s series five and seven as the format at its best. That’s largely due to the fantastic contestants all offering up a very different take on the tasks, and I love the way they’re really competitive too and desperately want to win. Their version of Greg, Jeremy Wells, was a little stilted at first but is clearly now enjoying himself a huge deal, while their Alex Horne, Paul Williams, is superb in the role, meek at times but the character really works and I love his interactions with all involved. The episodes have been uploaded by some kind soul at https://www.reddit.com/r/panelshows/ and if you’re a Taskmaster fan than this is essential viewing, when the series ends next week I’m going to miss it an enormous amount, and far more than the current UK one. ★★★★1/2

Video Of The Week
The very first Taskmaster was staged at the Edinburgh festival and involved some of the past contestants and one of the future ones, this video’s edited so only features the highlights, but it shows just why the format’s transferred to tv so well and is very funny too. https://www.youtube.com/watch?v=mjA1zzKe688

Link Of The Week:
Throughout this latest series of Taskmaster Ed Gamble’s been producing a weekly podcast where he chats to those involved in the series, and it has been a great listen each time around. https://taskmaster.tv/podcast