One And Done: Dead At Thirty 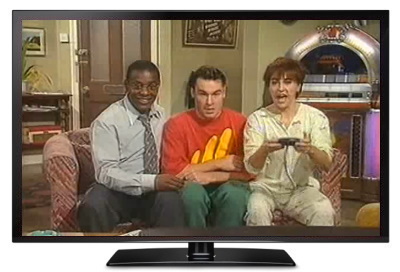 Featured as part of the “Bunch Of Five” collection of Channel 4 pilots that aired in the UK in June 1992, and which also included Vic and Bob’s The Weekenders and Frank Skinner’s Blue Heaven (the only one that went to series), Dead At Thirty was written by The Fast Show’s Charlie Higson and Paul Whitehouse, but you wouldn’t guess that if you watched this blind as it’s a laddish flat share comedy which contains very few laughs and a great deal of groans.

The plot sees Tim (Mark Williams), Lou (Lou Curram), Nick (Jesse Birdsall) and Compton (a very young Paterson Joseph) sharing a flat which is suffering from an infestation of ants, Lou is pissed off that her boyfriend Nobby has called off their weekend away, a plumber called Mycroft (Anthony O’Donnell) visits to sort out their hot water problem, Nick is interested in signing a girl group called The G-Spots, and all are obsessed with playing a Sega Mega Drive game (which is clearly Ghosts N Goblins, though they change the name / plot here).

How these four very different individuals came to live together is never explained, but it certainly doesn’t seem like it was because they were friends as there’s no natural chemistry between any of the characters and often they seem to actively dislike each other. Compton’s nickname for two of the other tenants are “Johnny Brains” and “Princess Dialling Finger” which yes, isn’t funny, and you’d have thought Whitehouse and Higson could have come up with something a lot funnier than that.

It’s something that applies to most of the dialogue, there’s a fair few weak play on words like when the plumber claims they have “Puerile dementia” for being so in to the video game, while some of it is just odd, Tim’s obsessed with cleaning to the extent that he claims he prays to “Gunther, the Swiss God of Tidiness”, while a young girl who is described in the credits as Concierge’s Daughter turns up to sort out the ants problem with the line “The Termite Terminator has arrived. Concierge says Hasta La Vista, Baby”, which is bemusing but not actually funny.

Mark Williams has the odd decent moment of physical comedy, including a fun enough bit when he hits the floor with a rolled up copy of Marie Clare as he’s trying to kill the ants, and the Concierge’s Daughter gets a laugh when she describes the girl group as “A right brassy lot they are too”, but most of the time this is a limp, tepid affair with jokes that fall flat and are either bland or delivered by a character in such a way that it feels forced and unnatural.

It really is a surprise as to how weak this is, admittedly it was fairly early on in both of the creator’s careers and Whitehouse had only worked on a few comedy shows at this point, rather than several million that he has to date, and the same applies with Higson, but only a couple of years later they were writing The Fast Show and were producing entertaining fare which still stands up to this day. For a Channel Four sitcom it’s strangely mainstream too, which is perhaps why it didn’t get commissioned, though I imagine the poor quality is probably the bigger factor.

Related Link:
You can watch Dead At Thirty on Youtube here and here.