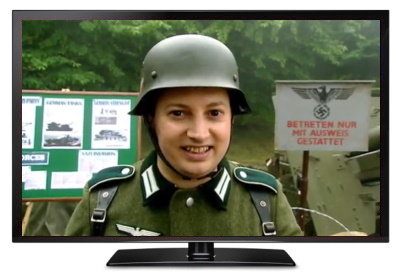 Peep Show is an incredibly rarity when it comes to British sitcoms in that it lasted for nine series with fifty four episodes being made over a period of twelve years, and it never became a tedious and inferior imitation of its formerly glorious self. Sure, there’s the odd weaker episode, the occasional dip in quality, and the one where they eat part of a dog came perilously close to jumping the old shark, but as a whole it’s a series which can be enjoyed from beginning right through to the very end.

Due to that, choosing what is essentially the best ever episode, one that is perfect to show to someone if you want them to become a fan for life, was fairly difficult to do and led to lots of ummming and ahhhhhing and various other strange very British noises. But in the end I chose season two’s second episode, “Jeremy Makes It” , as it contains the characters at their funniest, is a great introduction to their various neuroses, and features a number of extremely memorable moments.

Famous for being shot from the character’s point of view, at least most of the time, and getting to hear the two lead characters thoughts as well as their verbal outbursts, the two characters are old university friends who couldn’t really be more different. Mark (David Mitchell) is uptight, nervous, constantly stressed and obsessed about history, and Jeremy (Robert Webb) is a hedonistic idiot who’s not even close to being as smart as he thinks he is, and the two don’t really have anything in common bar that they’re oddballs without many other friends – the one they do have is Superhans (Matt King) who’s a slightly savvier version of Jeremy who rarely gives a toss about what anyone thinks of him.

In this episode there’s two main plot strands, one where Jeremy meets old school friend Gog (“At school if you were gonna to sneeze you’d run up and do it in his face”) who is doing rather well for himself, much to Jeremy’s disdain, and who mentions he’s trying to find a suitable soundtrack to a Honda advert his company is making, which leads to Jeremy persuading him that he’s his man and that he’ll be able to create exactly what he wants.

Meanwhile at work Mark makes a new friend in Daryl (Steve Edge), and much to Mark’s absolute and utter delight the two start messing around at work, with Mark excitedly exclaiming “This is crazy, I should be working, but I’m not”, and there’s few things funnier in life than David Mitchell working himself up to a pitched frenzy and being all manner of overjoyed at something so silly, especially when he thinks “I’ve got a friend. I’ve made a friend. Maybe there’s nothing wrong with me and I’m a normal human being”, and one of their pranks is stapling a sausage to the door of colleague Ian Krauss.

There’s also a very vague c-plot involving Superhans becoming addicted to crack, trotting out the old joke “Tell you what, that crack is really more-ish”, which definitely wasn’t an original gag and used to be part of a routine that Harry Hill did, and may well date further back than that. Lack of originality aside it’s a fun storyline, if only for Mark’s horror at seeing Superhans smoking it in the kitchen, and Jeremy’s mockery of Mark when he says “Oh I’m Mark, I’m in the eighties, I’m dying of heroin in a puddle in the corner in an advert. Drugs are fine Mark, everyone agrees now” which in context is shockingly funny stuff.

Because Jeremy is nothing but arrogant when he’s asked to make the soundtrack to Gog’s Honda advert he acts like an absolute turd to Mark, when the latter attempts to congratulate him Jeremy refuses to believe that it’s honestly meant, instead demanding they go out for a meal where he orders an insane amount of food, declaring “I’ve shared enough rice with you Mark, I’m in the big league now”. Of course it’s all going to backfire, but knowing that just makes these scenes of him being a twat all the funnier, and the recording of Jeremy’s music is astonishingly funny as he produces something which is borderline unlistenable, to the extent that even Jeremy realises it’s terrible, with former girlfriend Nancy (Rachel Blanchard) singing “Watch out they’re going to get you” over and over again in a painfully amusing manner.

Back at Mark’s workplace the sausage incident is considered a racial incident by Mark’s boss, the always magnificent Alan Johnson (Paterson Joseph), as “Ian Krause is of German extraction”, which is the first hint that everything’s not okay with Daryl. There’s more to come though when Daryl and Mark have a drink in Mark’s flat Daryl praises Jeremy Clarkson, casually comments that when it comes to getting food “He doesn’t fancy a chinky” and that he takes part in world war two re-enactments in his spare time. Poor old naïve Mark doesn’t pick up on anything though, and it’s not until the two of them are away in the countryside in full Nazi regalia that Daryl’s outbursts become truly offensive, to the point that even Mark realises he’s a racist, moaning “Oh shit, oh bollocks, I can’t just make a nice normal friend, oh no that would be far too simple”.

Back at the flat and Mark tries repeating a few of Daryl’s sentiments to Jeremy to see if he really is racist, with the latter at first questioning if “It wasn’t just racist horseplay?”, but once Mark explains further even Jeremy is aware that there’s something deeply wrong with the man, so there’s certainly no doubt about the situation. Initially Mark decides he wants nothing to do with him as well, and in a rare display of having a backbone “breaks up” with Daryl by telling him he no longer wants to be friends, but Jeremy later begs him to get back in touch as they need his musical abilities to satisfy Gog’s demands concerning the advert.

The episode ends with Daryl being fired after “someone” quietly informed upon him, while Jeremy, Superhans and Mark visit Gog so that he’ll pay Jeremy for the music he created but which Gog and Honda more than understandably don’t want. Seeing Jeremy threaten Gog by “accidentally” knocking his post on to the floor is beautifully funny, as is Superhans pouring Crunchy Nut cereal on the floor, and of course the whole thing ends very badly indeed.

If I’ve any complaints about the episode it’s that the magnificent Olivia Colman as Sophie doesn’t get much to do, though she is on hand for a couple of scenes of Mark being humiliated, and Alan Johnson is only in a couple of scenes too, but otherwise it’s a near on perfect example of why Peep Show is so great. Sure, there’s a certain amount of cringe comedy and if you don’t like that then Peep Show just isn’t the show for you, but there’s also a mix of other comedy styles too, Jeremy’s egotism and arrogance and then inevitable downfall lead to a lot of laughs, and Mark being overly happy is always pleasing to see even if you know it’s going to be short lived, and his early scenes larking about with Daryl prior to the latter’s racist outbursts are infectious fun.

Jeremy’s music manages to be even more awful then you might have thought it’d be, which is saying something given how much of a twat the man is, and a huge amount of credit must go to whoever managed to create such an aural disaster, which I presume is Daniel Pemberton as he’s credited as providing the music for the episode. Superhans is also at his finest here, his casual crack use and then the comedown off of it is hilarious, as his and Jeremy’s pathetic attempts at being threatening. It also manages to tackle a difficult subject extremely thoughtfully, and we’re never laughing with Daryl, only at the horror of what it might be like to find yourself in a situation where you clicked with someone who turns about to be an abject shit.

Peep Show managed to eek out career bests from all of its cast, well, bar Olivia Colman who of course would go on to be amazing in a number of different projects, and creators Sam Bain and Jesse Armstrong peaked here too, which is saying something given that one of them is the man behind the superb US series Succession. It’s a real, believable slice of British life, and an honest one at that, with two leads who have more flaws than good points and yet are still somehow very lovable characters, and this episode really shows them at both their very worst and their very best.

Related Links:
If based in the UK you can watch the episode on All4 here.
And if you’re outside of the UK, it’s on Dailymotion here.
Our review of the terrible US version of Peep Show with Johnny Galecki in the lead role.