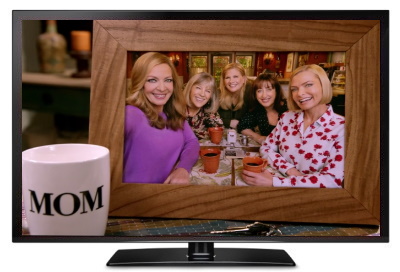 Mom Season 8 Episode 1
Mom was the rarest of beasts in that it was a CBS sitcom that was actually good, smart and funny, and it managed to continue being that for about six years. But during the last couple of seasons the show started to feel a little shaky, repeating old ground and during season seven I gave up on it, it never became actively bad, just bland. It appears that Anna Faris felt the same way too as she dramatically quit the show back in September, six weeks before the season was due to begin, and hasn’t really revealed why and instead just uttered platitudes about how much she loved being on the show but now her journey on it has come to an end. And because Faris is no longer present I thought I’d check in to see how they explained her departure, and if it was worth giving the show another chance. As for the former, well they explain it away as Kristy having left for law school somewhere on the East Coast, and after a few minutes of jokes about how much they miss her / everything she used to do for Bonnie (Allison Janney) and Adam (William Fichtner) the show then decided to ignore her absence until the very end, and instead there’s a storyline about Tammy (Kristen Johnston) having a sleepover for her birthday, and dreading contact with her murderous father. It was okay as well, a bottle episode for the majority of the running time where they swapped stories, played party games like truth or dare and joked about each other, but while amusing it was nothing that special and I found myself missing Faris’s character a lot, and so I doubt I’ll return to it now she’s no longer part of the series. ★★★

Kongen Befaler Season 2 Episodes 1 and 2 (Taskmaster Norway)
Because I’m something of a Taskmaster obsessive I’m currently watching not just the UK and the New Zealand versions of the show but also the second season of the Norwegian edition. Out of all of the countries who have taken on the format the Norwegians have captured the anarchic spirit of the show the best, with the hosts having a similar relationship to that of Greg and Alex, and they’ve also had the strongest line up of contestants. That said, I was surprised to see that two of the contestants have returned for this second season, so there’s only three new ones, and one of them is an Olympic handball champion rather than a comedian and I’m really not sure of the thinking behind that other than that I guess there really aren’t many Norwegian comedians out there. That or the two returning contestants, Maria Stevang and Calle Hellevang Larsen, were so popular that there would have been riots on the streets of Oslo if they’d not been in it, which obviously isn’t the case yet I wouldn’t have been shocked if it were as they really are great contestants who bring a lot to the series. The three newbies are also great though, and the tasks have been inspired, with one where they had to build a show jumping course being one of the funniest things I’ve seen from any of the various series, including the UK one, so if you’re a Taskmaster fan this is definitely worth seeking out, and thanks to Reddit you can watch nearly all of it right now. ★★★★ https://www.reddit.com/r/panelshow/comments/jk436w/kongen_befaler_taskmaster
_norway_s02e07_w_eng_subs/

Squeamish About Series 1
Matt Berry first portrayed Michael Squeamish in the mockumentary Road To Brexit, but he brought the character back a couple of months ago to narrate this new show all about various very British subjects, in what was the perfect pandemic series as it saw Berry speak over archive footage, even though it was commissioned long before everything went horribly wrong in the world. Berry’s more actorly than ever before (which is saying something given Toast of London) as he takes a look at a number of British institutions, from our idea of entertainment to the countryside to what the city of London is like, and it’s funny stuff because of the bizarre nature of a lot of the footage that they’ve found. It also excels due to daft character names, the mixture of outright lies that Squeamish claims are facts, some very silly exaggerations and mockery of our culture, plus there’s a couple of strong running jokes too, including one which Harry Hill’s World Of Tv also did which saw people speaking in a garbled manner with subtitles revealing what they supposedly said. At 14 minutes per episode it doesn’t outstay it’s welcome, though I wouldn’t want it to be any longer as though nicely funny by the time the fourth episode rolled around it was feeling a little familiar, and if it does return for a second series I hope they shake things up a little and not rely on the established formula too often. ★★★1/2

Paper Moon
An early effort from Peter Bogdanovich set during America’s great depression where Moze (Ryan O’Neal) ends up partnering up with Addie, the daughter of one of his old girlfriends (played by his O’Neal’s own daughter Tatum O’Neal), and the two travel across America scamming people left, right and centre. Madeleine Kahn has a fun supporting role as a sex obsessed type Moze briefly falls for but who Addie gets rid of, and the two leads are charming and full of moxie for sure, but it’s a little too slight for it to be considered a full on classic. ★★★3/4

Video Of The Week
Sassy Justice is a collaboration between Peter Serafinowicz, Trey Parker and Matt Stone, that explores the insane world of Deep Fakes, and it does so in a very amusing manner too, which given the talent behind it probably won’t come as the biggest shock in the world. https://www.youtube.com/watch?v=9WfZuNceFDM

Link of the Week
Comics’ Books is a great new podcast that interviews comedians about their reading habits, so far having chatted to the likes of Jessica Forstekew, Stuart Goldsmith, Njambi McGrath, Esgaa Akbar, Laura Lexx and Sikisa among others, and each edition has been funny and fascinating to listen to. https://www.lucydanser.co.uk/podcast