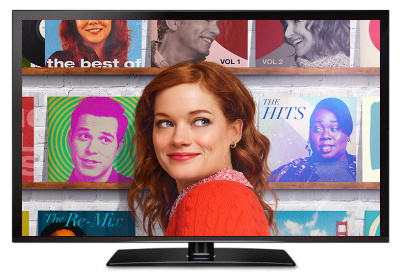 Despite me not being a big fan of musicals, this one won me over.

I had been seeing the ads before I watched the first episode. So, the marketers did a good job in designing the posters and banners splashed on IMDB. What I didn’t expect though, was to immensely like it (I’m talking 8/10).

I’m not sure what in ‘La La Land’ made me last until the end credits, as I am not a big fan of musicals. As of yet, I’ve avoided watching both ‘The Phantom of the Opera’ and ‘Les Misérables’. You’ve probably paused at this point, and if you were sitting across from me, peered over your laptop and studied me for a couple of seconds. Yes! I am the kind of gal who would readily embrace a film like ‘Begin Again’ (I actually really enjoyed it! Though think of it as a ‘different kind of musical’.) but you’d have to drag me (maybe not kicking and screaming) to ‘Jagged Little Pill‘ or ‘Waitress‘.

It’s the format of characters suddenly breaking into song that just doesn’t sit well with me. Maybe it’s unnecessary exposition, or maybe its because I’m not the kind who’d break out in song every 5-10 minutes. Even if I eventually learned that those ‘songs’ were thoughts. I guess it would be an alternate choice for those who get migraines during voice-overs?

So what of ‘La La Land’? I think the story structure was bearable enough that I was able to endure the unnecessary (at least to me) singing and dancing in between. What ‘Zoey’s Extraordinary Playlist’ manages to do is reduce the sting of those ‘song and dance’ breaks because they are closely intertwined with the comedy. One scene I particularly appreciated was a little over the halfway mark of Season 1 (‘Zoey’s Extraordinary Glitch’) when Zoey starts to both dance and sing out her inner thoughts. I get closer to the reason of what makes it ‘fresh’ as I read Kristen Baldwin’s reaction to watching the show:

This is where the set-up of the show differs from ‘Eli Stone’: Hard working programmer, Zoey Clarke (Jane Levy) is imbued with an ability to hear other people’s inner thoughts (in song) after an MRI machine malfunctions (chalk it up to an earthquake happening while she was inside it). Add to the humour is that her neighbour Mo (Alex Newell) is fond of singing and is the literal example of ‘inner thoughts in song’ (there are only few incidences that involve him singing out to her without him knowing). So I guess it makes sense that Zoey ask his help?

Zoey’s normal life complications include a father (Peter Gallagher) suffering a neurological condition (the scenes of him singing his heart out to her are quite touching) and a boss (Lauren Graham) waiting for her to step up. Now with her ‘super-senses’ (‘super-hearing’?), two potential love interests cross paths with her: best friend, Max (Skylar Astin), and new hire Simon (John Clarence Stewart). She has no idea how Max feels about her until he belts it out in song while Simon agonises over a parent’s death and his song filters through SPRQ Point’s open plan layout to Zoey’s desk.

Casting itself has been well done, but somehow there are viewers who think that Skylar isn’t a fit for Max. As for Lauren, I feel like Joan could have rewritten to fit her acting sensibilities more. Kind of like how Jane’s role fits her (whether it was rewritten or she was specifically hired because she filled in the character best). Mary Steenburgen, who plays Zoey’s mother, also feels like her character needed a bit of a review. Because when it’s done right (casting or re-writing) the result is Howie (Zak Orth) who seems like the wrong choice and the right one as carer for Zoey’s father. I look forward to his scenes and silently wish that Robert King and Michelle King would bring him for a season or two in ‘The Good Fight’.

What I appreciate most about the show is that it has Zoey respect when someone is in a relationship. Sadly, there are humans see any sort of commitment (including marriage) as a stepping stone before ‘something better’, and getting involved with other people before they properly end their current ones. She steps away as soon as she finds out that Simon has a significant other and we breathe a sigh of relief that he walks away to sort things out before perusing Zoey. Then there’s also making sure Max is a ‘choice’ and not just an annoyance (you know, the best friend who doesn’t get the girl), because Zoey just doesn’t see him as an option (because you know, friendship!?) but then eventually opens up to the possibility.

So if you enjoy physical comedy, this may be your ‘heart song’. I know… And I’m not sorry!