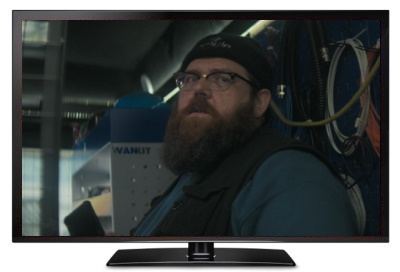 For a comedy that is written not only by Simon Pegg and Nick Frost but also Nat Saunders and James Serafinowicz, Truth Seekers has been surprisingly light on laughs, and even more surprisingly that seems by design rather than the jokes not working. Not that this is necessarily an issue either, it’s still a series that I’ve been gripped by and the ongoing story has led to my binging it reasonably quickly, but I’d be lying if I didn’t admit to wishing it had been slightly more amusing as the jokes that it has contained have been very funny.

Given everything that’s been established over the past seven episodes there was always the risk that it was going to be even more plot heavy than usual too, and lean on the horror elements rather than the comedic ones, and that turned out to be the case. Starting with a flashback to the grisly murder of Gus’s wife the episode was a tense affair and there were only a few times when any attempt at humour was made, and while this wouldn’t be a problem if it was exciting and engaging unfortunately it was all rather predictable.

Sure, there was the odd curveball, what with Helen being captured and injected with nanobots, and Simon Pegg’s Dave was involved in the plotline more than he had been previously, but most of the time you could easily guess what was going to happen, and it wasn’t exactly a shock when Gus turned out to be on stage behind Julian Barratt’s Dr Peter Toynbee during the eclipse. Elton and Astrid’s storyline was fairly bland too, and when Astrid agreed to go in to the numbers machine in an attempt to save the day given her undead status the fact that she didn’t come out again wasn’t a surprise.

It’s frustrating because these are characters I’ve grown very fond of over the course of the series, but for it to have such a by the numbers finale means I can’t help but feel disappointed by it. The jokes that it did have were very mild indeed, Malcolm McDowell didn’t get to do much at all, and after building up to it all season the way Helen was suddenly able to join in with the gang and their adventures felt quite odd, with her fear of interacting with others overcome in a ridiculously easy manner.

The second series has been set up nicely at least with the reveal that both Simon Pegg and Kelly McDonald’s characters are both supernatural creatures who are playing around with humanity for mysterious reasons, and it was heavily signposted that the search for wherever Astrid is will be an ongoing storyline, but if it does come back I hope the gag rate is at least a little higher, and that it’s a lot less predictable as well.