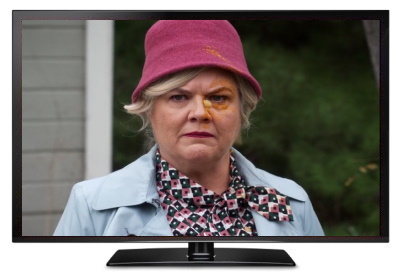 Mapleworth Murders Series 1 Episodes 1 – 3
Another series from Quibi, this was created and written by Paula Pell and John Lutz (of 30 Rock fame) and stars Pell as crime writer Abigail Mapleworth, who lives in a small town with an extremely high murder rate and a fuck load of cemeteries to hold the dead in, so yes, it is a pastiche of Murder She Wrote. In these first three episodes Abigail’s Australian niece Heidi (Hayley Magnus) turns up and she’ll be sharing a room with her Aunt as though she has more bedrooms, one is for the dogs and one is for the cats, while the other is where they meet for parties, which should give you an idea of the whimsical and oddly sweet sense of humour the show has. Mapleworth is friends with cop Gabriel Pewntz (Lutz) though the Chief of Police Billy Bills (JB Smoove, playing it in a similar manner to his role of Leon as Curb Your Enthusiasm, which is no bad thing as he’s hilarious in both) has no time for her. That’s mainly as he’s clearly pretty inept, which is highlighted when Chris Parnell and Tim Meadows play rival butchers but Parnell is soon deceased with some ham found shoved in his gob, and Bills struggles to find out who’s guilty. Luckily for him Abigail and Heidi are on hand to solve the crime, which they do quickly because they’re great, with Heidi proving to be equally adept at working out who’s all rather murderous and she makes for a fun sidekick indeed. It’s a gentle affair but a charmingly funny one, with lots of light spoofing of these kind of procedurals, the dialogue is particularly strong with Abigail fond of a ridiculously complicated innuendoes, and the cast are all turning in often silly but extremely endearing performances, all of which makes it the third Quibi series alongside Dummy and Reno 911! that’s actually worth watching.

Jonathan Ross’ Comedy Club Series 1 Episodes 1 and 2
I’ve a long standing dislike of Jonathan Ross, I was fond of him in the eighties but find him slightly desperate and at times creepy (at least when it comes to him interviewing female celebrities), so was always going to struggle a little with this show. Thankfully he’s not in it too much though, his opening monologue and brief interviews are annoying, as are the occasional interjections you hear him make while the comics are performing, but luckily most of the time it’s all about the acts as the show attempts to capture that comedy club feel. These are socially distanced times though so the audience is understandably sparse, and so when the jokes fall flat, boy can you tell and there’s way too many shots of Ross chuckling away, but it actually does an okay job at making it feel like a proper mixed bill club night. That’s helped by the fact that the line up’s have been pretty decent so far, some of the acts weren’t all that (Kae Kurd was just as poor as he was when I saw him live back in August, and Nigel Ng and Rob Beckett were both very average), but Edinburgh Award winner Jordan Brookes was superb, Sophie Duker made me laugh a good deal, Bec Hill was her usual hilarious self (albeit on for far too short a time), Kerry Godliman was really fun, and Leo Reich had some strong jokes, especially when it came to the second world war, so I’ll definitely be watching it again in the future even given my disdain for its host.

Archer Season 11 Episodes 2 and 3
Is Archer the most inconsistent show on tv right now? Well, until The Simpsons returns tonight the answer is yes, because that show tends to be fun about 15% of the time and dodgy the rest, whereas Archer is slightly more reliable, with season 10 worth watching about 50% of the time. And Season 11 is doing a little better than that too, though we’re only three episodes in so it could all change of course, but so far at least the first and third episodes were extremely enjoyable and only the second disappointed. That was weak because it went back to the tired old formula the show has relied on for far too long, as the gang were on a mission and arguing and bickering in an uneventful and rather uninspired manner, whereas episodes 1 and 3 have tried to shake things up a little, the third doing so particularly well by Lana and co initially leaving Archer out of events because they feel he’s just not ready yet / always fucking things up, and when he did turn up and do just that, he was quickly separated from the regular cast and given a new character to interact with, which made the episode far funnier than the preceding bland one. Archer being out of place and no longer quite as capable as he used to be seems to be an ongoing theme this year and I hope they explore it even further, but also it’d be good if they allowed the other characters to change a little (not necessarily grow either, but just be different) as that could allow the series to be even more playful and amusing.

Jumanji: The Next Level
More supposedly fun antics with The Rock, Kevin Hart, Jack Black and Karen Gillan fucking about in a console game, I was really fond of the first one but this is much, much weaker effort. Some of it’s still quite fun, and the action scenes are largely strong, but Kevin Hart channelling Danny Glover is a tedious chore (though that’s due to the script rather than Hart’s performance), and though I like Awkwafina elsewhere she’s poor here, and the final set piece against the big bad and end of the movie in general is really bland and by the numbers.

Video Of The Week
Izzy Askwith was crowned winner of the Funny Women competition this week, I’ve not been fortunate enough to see her live yet but this video of her performing earlier this year is a fantastic one, and shows just how much of a deserving winner she is. https://www.youtube.com/watch?v=yqRaUIDWmGY

Link of The Week
Somehow I’ve not yet got around to linking to the superb Scarfolk blog, which introduces a world that feels like it’s set in the seventies and influenced by public information films of the time where fear of rabies is tantamount, and that’s one of the less odd aspects. Which might not sound like comedy gold, but it is a fantastically strange and amusing site, packed full of unusual but very funny work. https://scarfolk.blogspot.com/