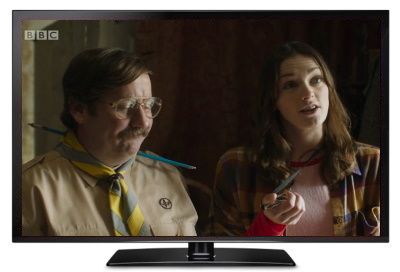 The first series finale saw Alison (Charlotte Ritchie) and Mike (Kiell Smith-Bynoe) on the edge of selling their haunted home to a hotel business, much to the horror of (the majority of) the ghosts who didn’t want them to leave, and eventually they managed to persuade Alison and Mike to stick around. But will they regret doing so? And now that the ghosts like them, how will the narrative move on?

Well, the first episode of the new series creates conflict by having Alison and Mike once again at odds with the various ghosts, though this is because after the Grey Lady (aka Fanny) is caught on camera and the picture is shared on social media. That causes a group of ghost hunting obsessives (including Colin Hoult who’s as fantastic here as he is in everything he does) turn up at Button House and Alison and Mike realise they can make some desperately needed money out of them by letting them in to the house at night to witness the apparitions at large.

There’s a problem though as the ghosts don’t think this is a good idea (bar Julian (Simon Farnaby) who won’t do it as Alison won’t buy him a new smart phone), so Alison decides the way forward is to fake it. This has mixed results however, and of course nothing goes quite to plan, and somewhat shockingly it doesn’t end with the world finally having proof that ghosts exist and that there is an afterlife after all.

That was always going to be the case of course so it was slightly predictable, but watching how everything played out was mostly fun, the ghost hunters were a nicely pompous bunch of one off characters, Alison’s obsession with Mike’s “No Sugar I’m Sweet Enough” mug being destroyed was a decent running gag, and Pat (Jim Howick) and Thomas (Mathew Baynton) attempting to be audibly recorded and essentially creating a radio show provided the biggest laughs of the episode. The build up to the ghost hunters arriving was strong as well, there was some nice daftness with the ghost’s “Impressions Club” and these are a very likeable, diverse bunch of characters who often generate humour with off the cuff remarks.

But despite all of the above this felt like a slightly lesser episode, as always with a show like this with such a large cast some get less to do than usual (Katy Wix’s Mary and headless fella Humphrey (Laurence Rickard) this time around were barely seen bar the very occasional line) and though there were the gag rate was high they were of the mostly mild variety, with the episode lacking in laugh out loud moments and impressive visual gags, something the previous series excelled at.

There’s still enough going on here that it’s a show I’m extremely fond of, the cast are without exception bloody superb, and the concept is an appealing one indeed. But whereas the majority of the previous series were of the four star and more variety this was definitely one of the weaker episodes, enjoyable for sure, but lacking in moments which would make anyone laugh out loud over and over again.