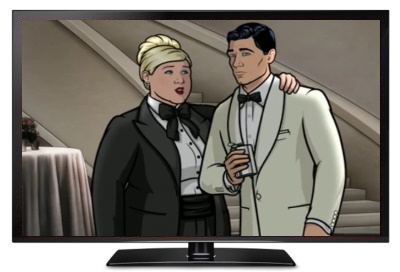 As fans of the show (and presumably the ones reading this) will know, at the end of season 7 Stirling Archer fell in to a coma, and that gave us three very uneven “Coma Seasons”, fantasy epics where Archer was variously in space, on a mysterious island in the Pacific, or LA in a very film noir-esque setting. All of them were patchy, there were still some great episodes but there was also some very disappointing ones, and creator Adam Reed decided to (mostly) leave the show at the end of the last season.

He’s set to return to write one episode this year but is no longer the showrunner, which sees Archer return to the land of the living, but in the three years he’s been napping quite a lot has changed at the agency, including Cyril now being a skilled agent, Cheryl’s no longer clinically insane, Cyril and Ray are pals, and most shockingly for Archer is that Lana’s now married to Robert (Stephen Tobolowsky), a bald billionaire.

Half the episode is devoted to Archer largely living in self pity land and catching up with everyone, and the second half is your standard early years Archer plotline where the gang are involved in a mission, with it revolving around capturing an art thief even if Archer’s unimpressed at what he calls a victim-less crime. By the show’s standards it’s a fairly mundane plot, but then it’s a deliberate plan of Malory’s, a small scale effort that will hopefully see Archer gradually regaining his moxie.

It’s a curious affair, there’s certainly a fair amount more depth than usual as Archer struggles to come to terms with his long term nerve damage and how everyone isn’t really that impressed by his return to the office, and only Pam seems to be really pleased to have him back. But it’s not just what’s happened to them over the years that affects Archer, but also how they’ve adapted to life without him, and are closer than ever before, and though the witty quips the show is famous for are still present they’re sparingly used.

Due to Archer’s downbeat mood there are some unusually bleak if yet still funny lines, including his chastising Woodhouse for being dead and refusing to accept a replacement valet, along with some gentle banter about how much he missed while away, best exemplified by Cheryl’s line “I guess you had to be there, and not in a coma”, but the first half is a muted occasion, likeable, fun enough, yet fairly bland. Thankfully it picks up in the second half once the gang are finally involved in a mission, even though it’s still riddled with Archer’s insecurities until the end.

Now that Archer’s feeling himself a little more (phrasing, I know) it’ll be interesting to see where the show goes. In many ways I hope it’s not just a return to a mix of office comedy and spy based antics, the show has done that to death in the past and was starting to feel a little routine even before the coma years. There’s only so much that can be done with the idea that Archer feels out of place in this vaguely strange new world too, and though Archer’s finally discovered just how much Lana means to him is an interesting potential storyline, how her marriage will effect that is open to question, but his (slightly) maturing as a character hopefully should see it explore new areas and not just repeat old ground.

I’m cautiously optimistic about the future of the show then, yet at the same time wouldn’t be shocked if it disappoints, I’ve been bitten by it far more than twice in the past. But judging this episode on its own merits it was at least a pleasing return to the real world, and mostly a return to form as well. I’ve a few quibbles, Archer showing no interest in his son felt especially odd and Malory had very little to do this week, but it was a pleasure to spend time with these characters again even if it wasn’t the show at its very best.