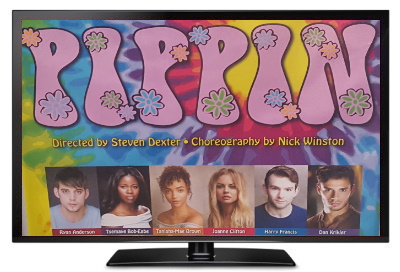 Very little theatre is being produced right now but this is the second recent show from the LAMBCO Productions theatre group, whose previous show at this venue, Fanny and Stella, was a very likeable affair that was only slightly let down by a lack of stand out songs. That’s definitely not the case with Stephen Schwartz and Roger O.Hirson’s Pippin though, there’s a number of extremely memorable numbers, but frustratingly it’s still a slightly flawed creation.

The musical is based on the story of Pippin, the son of King Charlemagne, who desperately wants to achieve something with his life, the only problem is that he isn’t quite sure what. That leads to him struggling as he at first attempts to find satisfaction as a soldier, a hedonistic sex addict, and then as a leader, before turning to exploring the nature of being a father and a partner, yet it seems like he’ll never truly be satisfied.

This first half has some great numbers including one which introduces Pippin to us all, a sterling group song which is fourth wall breaking and all the better for it, while Pippin’s grandmother (Strictly Come Dancing star Joanne Clifton) has a very enjoyable little ditty about the importance of having fun in life, the King’s military based track is a catchy effort, and Pippin’s recurring main theme is a very jaunty tune too, and there’s not a bad number within the whole lot.

Unfortunately the second, much shorter act sees the play fall apart. Whether this is partially due to it being truncated (other stagings of the play have been between half an hour and an hour longer) or the fault of the original text is hard to tell, but suddenly a character once dead is brought back to life in a very daft, throwaway manner which completely ruins the point the previous scenes made. Worst still is that Pippin is then portrayed as being quite unlikeable, the fourth wall breaking returns with a vengeance and in a manner which feels unsatisfying, and the ending is okay, but only okay.

It’s a real shame as I really enjoyed the first half, it was consistently four star material, the cast are all superb, the majority of the songs are well written and performed, and the play is impressively directed and choreographed in the round in a very small space. But the disappointing final thirty minutes or so lose it a star without any doubt, and left me wondering what the point of it all was apart from the vague suggestion that love is the only reason to live, at least probably, maybe?