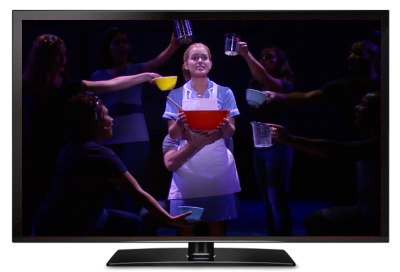 Waitress
As West End venues are still closed down I’ve been having to resort to the dark side of the net (eg Reddit) to see big theatrical plays and musicals, and the latest to be released is this is pro-shot version of the musical based on the Adrienne Shelly indie comedy drama, where in a small pie obsessed diner three waitresses have to try and deal with the craziness life and love throws up at them. So Jenna’s struggling because she’s pregnant by her shit of a husband yet in lust with her Doctor, Becky’s in a sex-less marriage but fucking the diner’s cook, and Dawn’s single but semi-stalked by a weirdo – Can any of them find happiness? Yes, yes they can, this is a feel good musical after all, where the songs are often very catchy with fun lyrics, though the second half is lacking a killer track, one which will have you falling madly in love with the piece (with Take It From An Old Man coming closest, but not quite being good enough), which is a shame as those in the first are definitely more memorable. Still, the characters are appealing, the lead actress is especially strong, the script is a smart one, and the mostly happy ending manages to avoid cliche and offers up hope for our motley crew, even if Becky’s plotline is all but forgotten about and it could / should have been a little less predictable in general.

Ruthless The Musical
Another pro-shot musical, this one’s about the perils of stardom as a very young actress is prepared to do anything to attain fame, and soon her mother becomes obsessed with stardom too. It’s a strange mix, the first half is very funny, there’s lots of mockery and commentary of the genre (one song is from the perspective of a critic who sings about how much she hates musicals which amuses greatly), and the kid’s a great comedic actress even if her singing voice occasionally grates. But the second half descends in to silliness, some of the fourth wall breaking is far too on the nose, and the ending is weak and then some. Also, while fine none of the songs are that great, and it’s definitely not a soundtrack I have any urge to own.

The Last Five Years
Which begins with Anna Kendrick lamenting a failed relationship between Kendrick’s struggling actress and Jeremy Jordan’s successful writer, before we jump back and witness a selection of vignettes from their five years together as hers detail the relationship as it moves backwards from the end to the beginning and his do the opposite. It’s song after song after song with barely any spoken dialogue and the majority of them are great, Kendrick’s quickly becoming an actress I’m shockingly fond of after this, Dummy and The Day Shall Come, while Jordan (also very strong in the pro-shot version of Newsies) is great too. Musically there’s not a huge amount of variation, but the songs have a mixture of very sweet, funny and affecting lyrics, and so I rate it highly.

Howard
This documentary turned up on Disney+ a couple of weeks ago, all about Howard Ashman, the writer (and sometimes director, at least theatrically) of some of the best musicals ever made like Little Shop Of Horrors, Beauty and the Beast, The Little Mermaid and Aladdin. It’s not a documentary which is particularly hilarious, especially given that it’s the tale of his life from childhood to death, and it covers his falling ill with HIV and sadly finally dying at the far too young age of 40, but it is a fascinating insight in to a man who created some of the funniest films ever made. Admittedly if you’re not a musicals fan there’s probably not that much that you’d find interesting, but if you are I’m all but certain that you’ll love it, mainly because there’s a great selection of talking heads, a good deal of interview footage of Howard, and its a fascinating to see how he created some of Disney’s best ever movies.

Video Of The Week
Pulling off musical parodies is pretty damn hard but Eliza Kingsbury’s proven she’s impressively skilled at doing so, having produced some great musical comedy in the past, and she does so here again with this very funny pastiche of Lady Gaga’s songs. https://www.youtube.com/watch?v=W-PHXxWuGT8&feature=youtu.be

Link Of The Week
The reputation of musicals has ebbed and flowed over the years, but this great Playbill article suggests we’re currently living through a golden age, and it’s an argument that I strongly agree with while also being a fun read too. https://www.playbill.com/article/are-we-living-in-a-new-golden-age-of-musical-theatre