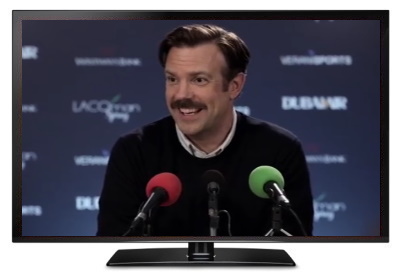 Ted Lasso started out as a character created to star in adverts for NBC Sports coverage of the Premier League, and is one that Jason Sudekis is clearly very fond of as he’s returned to him seven years on for this new Apple Tv+ series. The original promos saw Ted become the manager of “The Tottenham Hotspurs” despite not having a clue what football was really about, but this ignores that and starts afresh with him having been hired as the manager of the fictional Richmond AFC.

The adverts were amiable and likeable enough but this takes the character and expands upon it, mainly by making Ted goofier, he’s a far less angry character and much warmer and agreeable, occasionally like an excitable puppy, albeit a deceptively smart one. A few of the jokes from the promo’s have been recycled, like Ted’s confusion over how the game works, that there’s such a thing as ties and it’s a game of two halves and not four quarters, but most of the time it’s nicely original fare.

There’s a twist as well of course, as Lasso has only been hired by the club’s owner Rebecca (Hannah Waddingham) as after divorcing her cheating husband she’s taken control of the team, and as it was the only thing her husband truly loved she wishes to burn it to the ground. We’re also given a little bit of insight in to Ted’s personal life too, as one of the reasons he took the job was to give his wife some space, and he misses his son a great deal, and it’s possible that Keeley (Juno Temple), the girlfriend of one of the players, may serve as a potential love interest as the two bonded quickly.

It’s quite an odd mix, but it is one that works. The devious shenanigans and understandable bitterness of Rebecca is amusing and move the plot on in an intriguing way, but Ted’s all round goofiness is definitely the most appealing aspect of the show, and leads to the biggest laughs. The best of which saw him say to his friend Coach Beard (Brendan Hunt) “If we see each other in our dreams, let’s goof around a little bit, pretend like we don’t know each other”, and which highlights how much he enjoys being knowingly daft, and it’s an element which is infectious and then some.

There’s a few other characters who show a fair bit of potential as well, like the groundskeeper Nathan (Nick Mohammed) who’s instantly won over by Ted simply because he remembers Nathan’s name, while Coach Beard is on hand to give strong support to Ted in this strange new world and anchor some of the odder moments. As for the football players themselves, well we see very little of them in this first episode, but they should hopefully be another factor that the show can have a lot of fun with.

In some ways it’s a little similar to the BBC’s The First Team in that it features an American coming over to the UK to be part of a football team, the difference of course being in the BBC’s show it was a player and here it’s a manager. But the other big difference is that Ted Lasso is funny and not a pile of tedious, laddish shite like The First Team was, this has warmth and heart (which may not come as a complete shock if you’re aware that Sudekis co-created it with Scrubs’ Bill Lawrence) and a desire to be unpredictable and charming, and so is ridiculously better.

Related Links:
Two of the original Ted Lasso promo’s for NBC Sports are here and here.