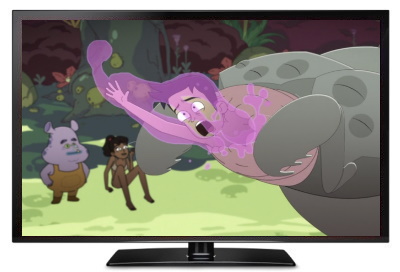 When I first heard the announcement that there was to be a Star Trek spin-off which was going to be animated and deliberately funny I had high hopes indeed, Discovery has been a little po-faced at times and Trek’s often at its best when it has a sense of humour about itself. The fact that it was going to be produced by Rick and Morty’s Mike McMahan pleased as well, and it was only when the trailers were released that I started having concerns.

The problem with the trailers were that they were filled with idiocy, but not of the amusing kind, and the characters seemed loud, irritating and bland at the same time, which is quite the feat, and the jokes of a lazy kind that might amuse if drunk or stoned but pretty much only then. That said, trailers are often notoriously unrepresentative of the finished product, so I tried to go in with an open mind, but though my expectations had been lowered more than a little unfortunately even those weren’t met

Opening in a lazy way with our lead Ensign Boimler (Jack Quaid) supposedly giving a captain’s log, it’s of course a bait and switch as he’s not really the captain, and he explains that he and his co-workers do the duller admin type work like the paperwork and making sure the planet’s spelt correctly, though why he’s pretending to the captain and explaining things in such a patronising way is unknown. Before he gets too far in to the log he’s interrupted by Ensign Mariner (Tawny Newsome) though, who may be the worst Star Trek character ever created, and yes, I have seen both Voyager and Enterprise.

Initially Mariner doesn’t stop rambling away for a second, talks utter shit about ninety per cent of the time, and mocks Boimler relentlessly, all of which made me want to push her out of an airlock within sixty seconds of the character being introduced, and it took at least three minutes before I wanted to do that to Neelix. Then thankfully the credits kick in, and they’re vaguely fun and quite probably the best part of the episode, so that was nice at least, but after they finished it starts disappointing again as we’re introduced to Ensign Tendi (Noël Wells), a green skinned alien who’s joining Boimler and Mariner down in the lower decks on the U.S.S. Cerritos. That’s all an excuse to give the audience a guided tour to the ship, as lazy devices are definitely the order of the day here, and all the while Mariner and Boimler banter, and it’s the kind of banter which gives the word a bad name.

Plot wise there’s two different strands, with the main one seeing Boimler asked to keep an eye on Mariner and he instantly suspects and then accuses her of selling weapons illegally. Of course she isn’t, she’s selling farm equipment to the inhabitants of the planet they’re currently visiting, but when they fight the inhabitants panic and unleash giant spiders upon them. Cue more arguing, with Mariner rambling on about all the shitty things she’s seen (including a sentient cave and a Klingon prison where she had to fight a yeti), and none of it is funny, and all of it is actively irritating.

Slightly better, albeit only slightly, is a plot with the Captain who comes down with some weird rage virus that sees him all but zombified and spitting out black goo. This takes place when Sam Rutherford (Eugene Cordero) and Ensign Barnes (Jessica McKenna) are on a date, and just when he says “I’m glad we got to sit down and get to know each other without any interruptions” they’re interrupted, because fucking hell this shit is tiresome and unimaginative. Then there’s lots of violence, and Boimler’s plotline conveniently dovetails with the other one and yeesh, it is not interesting or amusing at all.

There’s a lot of mileage in the concept of following those who do less glamorous jobs on a starship, and it’s an idea which has been bandied around for a good few decades now, but Lower Decks is a real mess, and a surprisingly disagreeable one at that. The first rule of Star Trek is always have likeable leads, and sure, there’s always been the odd character who isn’t all that, but Boimler’s a bland white male and Mariner is actively hateful, the kind of wacky character who only exists in animated fare and if you knew her in real life you’d run a mile, if not several million.

What could have been a fun workplace comedy set in space is an action packed piece instead with lots of tiresome gross out humour,and it’s not funny at all, and ultimately disappoints in the extreme. I’ve not much hope that it’s going to improve over time either, not unless they end up Tasha Yar-ing Mariner (ie she dies brutally at the end of the first season and no one cares). I’ve sat through some really poor episodes of Star Trek in the past,  but this is the worst thing that has ever been attached to the name and it’s so bad I doubt I’ll watch another single minute of it.