Comedy Snippets: In My Skin, Norsemen + 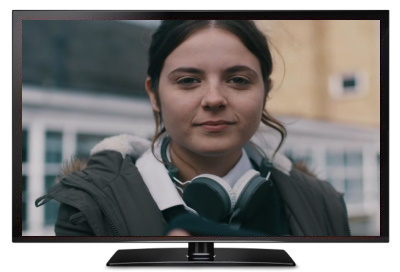 In My Skin Series 1 Episode 1
This BBC3 comedy aired to great acclaim back in March, with it dealing with the life of sixteen year old Bethan (Gabrielle Creevy) who has to try and cope with a bi-polar mother (Jo Hartley), alcoholic father (Rhodri Meilir) and a chaotic life in general. Now it’s available to view in the US on Hulu as the lockdown has led to all of the US networks buying a sod load of British fare to fill their schedules, which is also why Taskmaster is getting an outing on the CW network next week, and Sarah Kendall’s Frayed is up on HBO Max now. Right from the start it feels like a pretty realistic take on teenage life, and so that means it’s a mixture of the bleak and the ridiculous, and shows all of the highs (getting drunk in the park, talking absolute shit about classmates fucking themselves with frozen sausages, vomiting a lot) along with all of the lows, which for poor old Bethan mean dealing with her mentally unwell mother who likes singing in the street in the middle of the night when in a hyper mood but when sectioned she’s in an understandably dark place indeed. It’s often pretty funny, the students writing some painfully amusing but also pretentious poetry is a big part of the first episode which leads to a lot of laughs, but also amusing is a cunty gym teacher who thinks they’re all losers and who is obsessed with the students “all catching diabetes” and a slightly bizarre scene with Bethan dealing with a shop keeper who seems to hate all children made me laugh too. But the upsetting scenes with her mother and the shitty way some of Bethan’s fellow students treat each other means that it’s something which has a lot more depth than many a teen comedy, and due to this it’s of far more interest and far more watchable than the majority as well.

Norsemen Series 1 Episode 1
An acclaimed Norwegian that’s currently on its fourth season, this is a beautifully filmed comedy set in 790AD about a group of vikings, and though many love it, it’s a show that I just didn’t click with at all. A lot of the humour revolves around the idea of people speaking in a modern way as they discuss the strange ways of the past, for example Orm the stand-in chieftain at one point comments “I will take an executive decision”, while the actual chieftain complains about how “Fear based leadership” isn’t really him, and when asked to commit suicide by jumping off a huge cliff an elderly slave responds “Its just not very tempting” and refuses to do so. These moments are mildly amusing for sure, but they’re the best of an average bunch and unfortunately its often got quite a crass sense of humour about itself too, there’s jokes about how one of the women got really in to raping monks while out and about pillaging and it’s supposedly acceptable as it’s male rape that’s being made fun of, but that’s something I wildly disagree with. It also seems deliberately mean elsewhere, in one scene a slave complains about his cape being stolen and is forced to eat shit, and the way the scene is constructed just made it feel unpleasant rather than amusing. Elsewhere some of the humour is a bit obvious, like how Orm moans about Freya’s necklace of monk’s penises and complains about how big they are, the joke being that they’re rather small indeed, and it’s all just a bit bland in general. Given the critical acclaim I can only presume it picks up and becomes a lot more impressive as it goes on, but this first episode really didn’t work for me so I’ll never find out.

American Ultra
A really bad case of “If you’ve seen the trailer you’ve seen all the best bits”, Jesse Einsenberg’s a stoner loser and he and Kirsten Stewart have been fucking for a while now, but hey, actually he’s a mind washed CIA experiment who can kill people in really cool ways despite not understanding how he’s doing such things. It’s an odd mix, mainly as the violence is extreme and vicious, but there’s way too much relationship angst weighing the whole thing down for it to be that enjoyable. If you’re really intrigued by the premise or particularly like the cast than it’s perhaps worth watching the initial ten minute set up to see if it’s your cup of tea, but otherwise I’d just fast forward to the the action scenes but skip the rest as you really won’t miss out on much.

My Neighbors The Yamadas
This is the weakest Studio Ghibli film I’ve seen yet (though I’ve not watched Tales From Earthsea or Ocean Waves so far), it starts off in a nicely imaginative and unpredictable way before telling a cute tale about the time the family forgot their daughter in a shopping mall, but after that it’s just a selection of sketches concerning family life and while often likeable and gently amusing it really isn’t anything that amazing. It picks up during the final twenty minutes or so with a segment involving a motorcycle gang and an ending which is half sweet and half melancholic, but I still felt it was disappointing when compared to everything else that the studio has produced.

Video Of The Week
Andy Daly’s Review With Forrest MacNeil is one of the great American comedy series of the 21st Century, and Daly’s always said he’d like to bring back the character for another show. That’s not quite happened yet, but this short video / advert for the complete series dvd set sees him reprise Forrest as he tells us what he’s been up to over the past four years which is largely reviewing life for private clients, it’s gorgeously funny as you might expect, and boy is it good to have him back. https://www.youtube.com/watch?v=gu2bOJweujE&feature=youtu.be

Link(s) Of The Week
Taskmaster is coming back in the Autumn, though due to the Pandemic there will be some small changes, including how the studio segments won’t be filmed in front of an audience, and in this interview Alex Horne and Greg Davies discuss this, along with other elements of the greatly awaited forthcoming series. https://www.denofgeek.com/tv/new-taskmaster-now-filming-how-covid-19-will-affect-series-10/ while in this great AV Club interview Alex chats about the show and introduces it to US viewers – https://tv.avclub.com/get-some-classical-music-and-3-dozen-eggs-taskmaster-s-1844554126