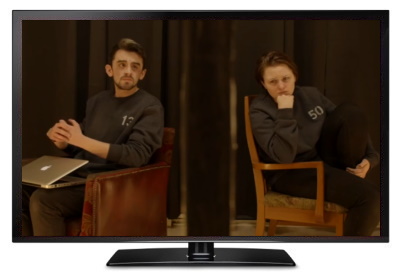 Eliot J Fallows is one of the hosts of the superb Sean and Eliot Read The Bible podcast but here he’s created a very different work, a timely short film that sees him play a man taking part in a medical trial which entails him spending two weeks alone in a room, with only occasional visits from a nurse and the ability to chat to the woman in the room next door to keep him sane.

The short begins with the never named Subject 13 (Fallows) desperately seeking a way to earn money quick, and the next thing we know he’s part of a trial and is being given the once over by Nurse Jason (Alastair Clayton) who tells him what to expect when it comes to side effects and how he might spend his time in hospital. Which doesn’t amount to much unfortunately, especially as the wifi’s horrendous, though Jason chirpily mentions that “We do not have a rule against masturbation, so feel free” – though 13 should tell him if anything weird comes out like “Black stuff” and “Air”.

It’s a nicely weird piece, one which explores the loneliness such an occasion would bring, but also the relationship between 13 and the woman in the next room, who we only know as 50 (Franseca Fowler). While initially fractious the two soon bond, even though at various times they’re going through if not hell than a pretty miserable time of it, and the dialogue between them is mostly pretty funny, especially when they do impersonations of Christopher Walken and Liza Minelli to pass the time. Nurse Jason gets a fair few decent lines as well, especially as he rambles on about the Murder Scarecrow film he lends to 13 and worries about whether anyone will attend his birthday celebrations.

It’s at its funniest when it becomes surreal however, like some of the announcements made over the tannoy which reminded me of the best of those in Adult Swim’s Childrens Hospital, as we hear things like “Volunteers are reminded to let someone know if your blood gets too powdery” and “Dr Man to the mortuary please, they’ve escaped again”. Indeed the odder it gets the more enjoyable it is, and for me the best parts of the film, and what makes it so memorable, are the hallucinations 13 suffers from, which include interactions with his ex and his former boss, both of whom we see in puppet form mocking him greatly, and at one point 13 becomes the Murder Scarecrow of the films we hear so much about in moments which are both funny and nicely disturbing too.

This really is a fantastic short, it’s funny, weird and has a very distinctive and original sense of humour about itself. As much as the budding friendship between the two subjects who never meet is the meat and bones of the piece, and necessarily grounds it in reality, the stranger it gets the funnier it gets, and I can’t wait to see what Fallows does next as this is an unusual but extremely memorable work.

Related Link:
You can watch Flu & Me on youtube here.