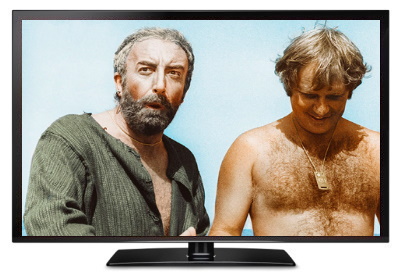 The Ghost Of Peter Sellers
A documentary directed by Peter Medak (A Day In The Life Of Joe Egg, The Ruling Class, The Krays) this is all about the making of Ghost In The Noonday Sun, a 1973 effort Medak also directed and which starred Peter Sellers, with a script from Spike Milligan, that was completed but the studio then refused to release (though it did eventually come out on video in the eighties, something oddly not mentioned here). In the film Medak revisits the surviving individuals who were involved with the movie and journeys to old locations where it was shot, and the story of the production is told as we learn it was beset by a number of problems from the ship they were filming on crashing in to rocks to terrible weather and cast and crew vomiting all over the place. The biggest issue was undoubtedly Sellers though, who suffered from terrible mood swings and was allegedly jealous of anyone who was funny in the film, and who somehow managed to get the film’s first producers fired very early on. Despite initially being behind the production and recruiting Medak as the director, Sellers then decided he really didn’t want to be involved in it anymore, faking a heart attack and heading off to dinner back in England with Princess Margaret, and when he returned (complete with a fake letter from a paid off doctor saying he was unfit to work), shortly afterwards he tried to get the crew to try and stage a vote of no confidence in the director. He failed, but then was a general arse, late to the set all the time, along with refusing to work with one of the lead actors, and then Sellers demanded Spike Milligan rewrote the film half way through the production. It’s a fascinating documentary but one which occasionally feels a little manipulative, certainly the use of music at times portrays Sellers in a very melodramatic light, and though there’s a lot of other talking heads around to suggest what a nightmare Sellers could be, including other directors and his own daughter, sometimes it feels a little over the top. It’s a real shame it’s not a little more balanced as even a tiny bit of research shows people who did praise the man, and weirdly at the end Medak goes on about how much he loved Sellers, even though he’s just spent the ninety minutes tearing him apart, so I can’t help but wish it had been directed by someone else so that we got a possibly more fair and honest take on what really happened.

French Exit by Patrick DeWitt
DeWitt is best known for his superb novel The Sisters Brothers which was adapted in to a not very good film starring Joaquin Phoenix and John C. Reilly back in 2018. I’m also very fond of his first novel, Ablutions, about a barman who became dependent on alcohol and pills and which is a very wry read indeed, so chances were always high that I’d like his latest work, and that turned out to be the case. It’s quite a different creation to his previous work though, a very arch comedy of manners concerning a mother and son and their close and often sweet friendship, a third of the way through the novel it becomes darker when it becomes increasingly clear that she intends to commit suicide now that she’s almost lost everything and been forced to move to Paris to live in a friend’s apartment for free – but will she actually go through with it? It has an unusual cast of supporting characters, a nicely odd fantastical element when it’s suggested that their cat Small Frank is possessed by the long deceased husband/father and there’s a medium who can chat with him, and DeWitt imbues his characters with many a superb turn of phrase, making them often very funny. The only problem I had with it is that I’m not quite certain about the ending, but it’s something I have a feeling will grow on me over time, and otherwise it’s a book which made me laugh out loud a good deal, and another novel by DeWitt that I’m very fond of.

The Man In The White Suit
Alec Guinness is a softly spoken Cambridge graduate who keeps on getting fired from the mills he works at because he’s conducting experiments he really shouldn’t be, as he tries to create a material which is self cleaning. It starts off punchily but then slows down to a rather annoying pace and it’s not until 40 minutes in that Guinness’s white suit is finally fabricated and it finally becomes a satire of industry, as of course many (including stinking rich types but also trade unions) are against something which could see the end of clothing manufacturing, or it reduced an enormous amount, anyhow. Guinness is fine in a role which doesn’t make many demands on his comic talents, Vida Hope is great as the very earthy Bertha, and Jean Greenwood has some spiky moments and is occasionally amusing, but most of the time it’s a bunch of tedious white men bickering with each other and though there’s occasional slithers of black humour and satire of capitalism and class, as a whole it isn’t that funny, to me it felt rather mean spirited and it’s a rare example of an Ealing comedy that I just didn’t get on with.

Ninotchka
Sold as the movie where “Garbo Laughs!”, this is a Paris based lark set before the second world war, as Russian envoys are sent to sell rare jewellery, but their plan is complicated by a legal issue. Cue the entrance of Greta Garbo to sort things out, whilst Melvyn Douglas tries to fuck her, but the problem is that she’s a surly communist – and can her heart really be won over by a flirty french type / western decadence? The answer might amaze you! Or not, and though it’s co-written by Billy Wilder and has a smart and funny script, with some very pointed satire of Russia, it lags in the middle and the romantic sections certainly weigh it down, and I wasn’t won over by the occasionally sexist Douglas in the way Garbo was. It’s still a decent enough watch, but I don’t think it quite deserves its reputation as one of the best ever American comedies of its time.

Video Of The Week
The Toussant Douglass Shows is a short sketch show clearly filmed since the lockdown, but despite that meaning it uses a lot of green screen and only stars Toussant it’s still really very funny stuff, and hopefully we’ll get more episodes soon. https://www.youtube.com/watch?v=JTKjNeLQnsU

Link Of The Week
I love Joe Pera here and miss his presence on our screens nearly every day, and if you’re the same perhaps you’ll find this interview with him might soothe your angry soul. https://www.gq.com/story/joe-pera-talks-with-you-about-fashion