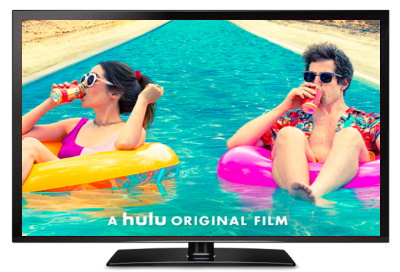 Andy Samberg’s one of my favourite people out there, not only because of his winning role in Brooklyn Nine-Nine but also due to his involvement in The Lonely Island who have produced not only some beautifully funny music but also some of the funniest films of recent years including Popstar: Never Stop Popping, Hot Rod and The Unauthorised Bash Brothers Experience. He’s yet to become a huge star though, for a while it looked like Palm Springs might be the film to do this as Hulu bought it at Sundance for $17.5 million and planned to release it in cinemas, but due to the Pandemic it’s sadly not to be.

Samberg’s loss is our gain however, as this Groundhog Day time loop comedy is now available to anyone with access to Hulu, and it’s mostly charming material where Nyles (Samberg) and Misty (Search Party’s Meredith Hagner) are attending a wedding, but it’s pretty clear from the get go they’re not exactly made for each other. Cue various antics, but the twist here is that we soon learn that Nyles is already caught in a time loop and acting out the day over and over again, and has been for a very long time now, which is why he’s able to give the perfect wedding speech, know that Misty is cheating on him, and that a weird bastard called Roy (J.K. Simmons) wants him dead.

On the second time around there’s another twist though, as the bride’s sister Sarah (Cristin Milioti) who Nyles met and previously flirted with is now part of the time loop, and a lot more freaked out than Nyles who seems to be enjoying the life he’s trapped in. All of which might sound like a major spoiler, but this all takes place in the first seventeen minutes of the movie and then the film kicks off a proper as life for Nyles becomes much more complicated as Sarah is desperate to escape the time loop. There’s a couple of other fun twists along the way including Roy’s backstory, flashbacks to Nyles’ past exploits (with one involving Peter Gallagher especially making me laugh), but the real fun comes when Sarah and Nyles lean in to their pointless existence and the ridiculous silliness they get up to as they slowly fall in love.

Unfortunately and extremely frustratingly it loses a couple of points for having that all too predictable bit two thirds of the way in when the couple have a falling out and shout at each other a lot, it’s something ninety nine percent of rom-coms do and I really wish they’d find a more inventive and original way to create tension within the genre. Palm Springs definitely deserves a lot of criticism for it as well as due to its fantastical storyline it could easily have avoided it, and though still fun after this it becomes a much more predictable affair.

I’ve a penchant for time loop films and it’s a rare one that disappoints, and a good deal of Palm Springs doesn’t do that, Nyles and Sarah’s time loop antics are right up there with Bill Murray’s in Groundhog Day (a film which has aged slightly poorly when it comes to sexual politics as it goes, but bar that is still a huge amount of fun), so it’s really irritating that it appears to run out of steam and become a by the numbers affair in the final third, especially as Samberg and Milotti’s romance is once that completely convinces and the latter is especially superb at making it clear how crazy she is for Samberg.

It’s also a little guilty of not making the best of its fantastic supporting cast which includes Peter Gallagher as Sarah’s father, Jena Friedman as a sarcastic bartender and Joe Pera Talks With You actor and co-writer Conner O’Malley is perfect as a douchebag, and though J.K. Simmons is great and gets some very funny moments I wish he’d had more screen time too. All of which is a tad annoying as for a fair while it was a film that I thought I was going to rave about, but because it becomes such a bland piece in the last half hour it sadly falls in to the hoary old category of “Films I’m glad I’ve seen but will never, ever watch again”.