One And Done: The Hopes 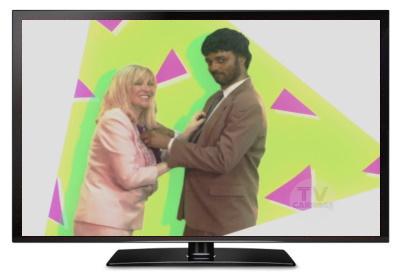 The Hopes is a pilot from Derrick Beckles, the creator of the superb series Mostly 4 Millennials and Hot Package, both of which were magazine style programmes involving weird old footage from other tv shows, sketches and interviews. But this is a very different affair and sees Beckles acting rather than appearing as a version of himself, as he takes on the role of family man Noel Hope.

A little like Tim and Eric’s Beef House this is a spoof of family sitcoms from the eighties and nineties though this is even more meta and surreal than that show was what with the way Noel Hope (Beckles) enters at the beginning dressed in over the top camouflage gear and comments that he’s late for “Stake out practice” and “psychic classes”, commenting with the latter “and believe me they know I’m going to be late”, a lazy joke for sure but one Beckles has the charm to carry off.

His wife Chase (Courtney Love) is a less likeable individual and that’s nothing to do with Love’s acting talents, she’s fine in this, nothing amazing but she handles the material well enough. But her character’s pretty weird and obsessive, with the main plot of the storyline revolving around her blackmailing two actresses on the books of her talent agency in to dating her two sons Henry Lee and Lucas (played by Bobbé J Thompson and Jak Knight).

Said sons are wheelchair bound (though often leap out of them and their frayed shoes suggest they’re faking it) and clearly not the most honourable of gentlemen, what with the way Henry Lee responds to the Love’s matchmaking with the line “A date with real bitches?”, yet it turns out they’re both reluctant to meet up with the girls as they have to write a report on what it’s like to be blind despite clearly not being that. So Chase decides to persuade the boy’s dates to pretend to be blind too, but soon both get fed up with the ruse.

Events start becoming even more out of hand when the sons steal the family video camera and try to sell it, getting the two reluctant girls in on in the deal, while a greatly missed Noah finally turns up again and is horrified to discover the camera is missing. That leads to the most outlandish (yet also funniest) part of the show where he tries to access the family dog’s memories to see who stole it, only to see grainy footage of a man in pink underwear thrusting his groin.

Everything is mostly resolved in the end, even if it does turn out that Chase was lying and couldn’t have come through with what she promised the two girls, and then the final gag is all about the dog doing a shit on the floor as Chase weirdly coughs a lot, bringing to a close a pilot which is deliberately odd and though fairly funny in places isn’t something I exactly fell madly in love with.

Mocking the tropes of eighties comedy has a limited shelf life and it even stops being funny in this first episode, with some deliberately cartoonish but rather annoying villainy from the sons quickly becoming tiresome, and the way they send up an overly enthusiastic audience, who whoop and cheer and hiss and boo at various points in the episode, feels bland by the end.

Better are a couple of point blank weird moments, like a running gag with Chase with a voice over telling her to think fast, but not too fast, and some props which are needlessly green screened, while the scene with Noah and the dog is easily the funniest and if they’d decided to stop satirising old sitcoms and just gone in that kind of weird direction it might have been a lot funnier.

As it is it’s the kind of thing I imagine could have lasted a season or so and Beckles has proven himself to be such a talented individual I have no doubt he could have pulled it off, but I’m not convinced that much more could be done with the concept. So though The Hopes is likeable at times I’m not distressed that it wasn’t given a full series, especially as Derrick Beckles went on to create the far funnier Mostly 4 Millennials.