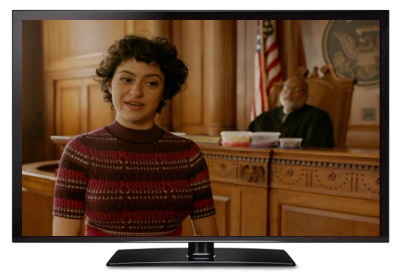 The odds were always stacked against Dory Seif (Alia Shawkat) finishing the season having been found not guilty of the murder of private eye Keith Powell. For one thing the season started with a shaven haired Dory promising us the full truth as to what had happened, but there was also a ridiculous amount of evidence supporting the fact that she and Drew (John Reynolds) had committed the crime, a couple of witnesses to the burial of the body, oh, and she also murdered April at the end of the previous season so though it might have been Drew who delivered the final blow that killed Keith, Dory was definitely guilty of one murder.

It would have been a dull affair without a big twist though, and of course that’s what we got as – spoiler alert – Dory and Drew were found not guilty at the end of the episode but then just as it seemed Dory was home free she was tackled to the ground and it was revealed that her obsessed psychotic fan hadn’t died a couple of episodes ago after being hit by a car, despite what Drew said, and then we saw Dory in horrendous circumstances, tied up and forced to confess in front of a video camera.

It was a bleak way to end the show, but then this is a series which has specialised with distressing season finales what with Keith being killed in the first and April in the second. Fortunately the show has been renewed for a fourth season so this isn’t the end for Dory and co, though what that will look like is anyone’s guess. I’d previously presumed that Dory would be found guilty and the next season would be an examination of the prison system, but that’s clearly not going to be the case, at the very least not at first anyhow.

It does seem likely that it will continue to be an examination of the media however, something which has already been a large element of this year’s batch of episodes as the series has unflinchingly shown it as being nearly always abhorrent, presenting a case which was nigh on impossible to disagree with. The way the news reported upon the crime and the paparazzi’s non-stop intrusion in to Dory’s life was bleak enough but throw in various talk shows and of course the repulsive Charlie Feeny (Chloe Fineman) who despite calling him a faggot on air is someone Elliott wishes to work with, and you’ve got a pretty vicious and nearly always funny indictment of how the media works.

Elsewhere this year seemed to revolve around the ways individuals exploit each other, Dory of course being the main offender when it came to boyfriend Drew and her friends and family, but we also saw poor old Chantal (Clare McNulty) being used by dodgy financier Wallace Shawn in a fun plot line which could have done with being developed more, along with how religion takes advantage of those when they’re at their lowest ebb, and of course Elliott (John Early) and Marc (Jeffery Self) had a toxic relationship that was filled with abuse and though Elliott’s consistently the funniest character and so one I’m very fond of, dear god am I pleased that Marc was able to escape.

So this time around it wasn’t just Dory and co that were portrayed as reasonably awful human beings but, well, pretty much everyone bar Marc and a barely seen and greatly missed Julian who after being paid off by Mary Ferguson headed out of the country, though it appears he should be back next year at least. You could make the argument that the lawyers were not actively terrible but bar Polly (Michaela Watkins) they were out for themselves and didn’t seem to care for Dory or Drew (or Eddie, as his lawyer Bob (Louie Anderson) amusingly kept on accidentally calling him) and, um, well Chantal and Portia are more stupid than cruel, but that’s about it really.

Not that I’m complaining, Search Party is at its best when it’s offering up a sharp, smart take down of its subjects, and this third season did it in style, and was the most enjoyable one yet. How much more mileage there is in exploring these increasingly deplorable characters is open to question (though I’d love a Larry Sanders-esque mockumentary with Elliott and his new tv show) but I’m enormously looking forward to the fourth season, if only to see what else series creators Sarah-Violet Bliss and Charles Rogers choose to examine and attack next time around.