Stand Up Special Review: Eddie Pepitone – For The Masses 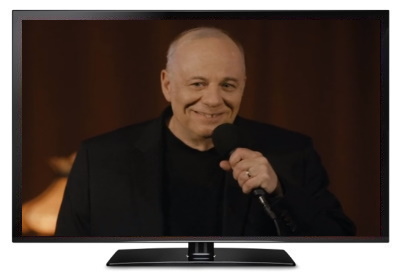 Eddie Pepitone is one of those comedians that I wish everyone in the world knew about, but sadly he’s seen as something of a Comedian’s Comedian, as the 2012 documentary The Bitter Buddha highlighted. That saw a number of well known figures including Zach Galifianakis, Sarah Silverman, Marc Maron and Patton Oswalt talk about how great he is, and though his star has risen a little due to that since then and this is his second Amazon special, not that many / enough people are aware of his existence.

Those who love him adore him though, and hopefully the amount will grow thanks to this latest hour of comedy which is sterling stuff indeed, even if Eddie is angrier and more bitter than ever before thanks to the fucked up state of the world. Which is a huge theme within this special, as he discusses how we’re approaching the end of the world, and how even though every generation has thought that with us it’s really true, and the case he makes is all but impossible to disagree with.

That might sound like a slightly depressing subject for a comedy special but Pepitone makes it funny by talking about the numerous ways our society is falling apart , including an especially pointed routine concerning how we ignore the news and just obsess about television and pornography. Eddie’s not suggesting he’s exempt from such behaviour however, with the special containing a large amount of extremely funny self-deprecation running throughout it at all times.

There’s also a certain amount of stories and thoughts about his own life in the show, with the beginning dealing with his relationship with his father in a gloriously funny manner, from the useless advice he was given like “When you’re putting away a ouija board, always put it on the top shelf” to the fantastic punchline to one story where he exclaims “And that’s why I love rough sex” to an all but hysterical audience.

There’s also sharp material about his age and the possibility of his suffering from Alzheimer’s disease at some point in his life, along with a story about his wooing his wife with Bukowski’s poetry, the ways his marriage has rooted him and his response to Adult Colouring Books, the suggestion that an app is trying to kill him, and his love for sports and how he wishes he wasn’t so passionate about them, all of which is superb and packed with laugh out loud moments, as is a long marriage toast that is filled with his trademark frustration and which just gets funnier and funnier as it goes on.

But the thing Pepitone keeps returning to is the state of the world, and it’s this that makes him the exceptional comedian that he is. From Climate Breakdown to fascism, the horror of America’s current political situation and the misery found almost every where, he refuses to soft coat such ideas and yet still generates huge laughs from his reaction to these depressing times, all of which comes to an end with a final routine revolving around an advert he was asked to appear in, and which allows Pepitone to highlight just how insane the world is while still making it bleakly funny too.

This really is Pepitone at the top of his game, as he leaps from shouty rants to gentle commentary in a special which doesn’t have a single weak moment. As he comments himself you won’t find material about trite subjects like dating here, only stark honesty about existence, but it’s that which makes him such a unique comedian, and one we’re incredibly lucky to have. So cherish him, as who knows how much longer we’ll be able to do such a thing.

Related Link:
You can watch Eddie Pepitone – For The Masses on Amazon Prime here.