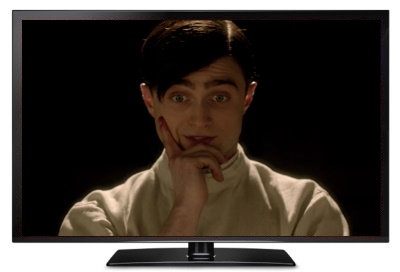 A Young Doctor’s Notebook Series 1 Episode 1
I’m still not quite sure what to make of this Sky comedy with Daniel Radcliffe and Jon Hamm playing the same character at different ages, it passed me by at the time (which is strange given how fond I am of both members of the cast) but upon watching it now it’s something of an oddity. Based on a critically acclaimed novel it’s a very meta affair as the set up is that Jon Hamm narrates a tale of his first posting as a Doctor in Russia in 1917 when he was sent to a remote village to run a hospital, and Radcliffe plays the younger version of the character. Upon arrival everyone can’t believe how young he is, he’s incredibly nervous about the possibility of screwing up, while Hamm’s version of the character drily narrates events with a wry sense of humour, saying things like “I saw a lot of horror and tragedy in here. Happy days” and seemingly meaning it. Vicki Pepperdine, Adam Godley and Rosie Cavaliero are great as his disapproving colleagues, all of whom enormously miss Leopold Leopoldovich, the doctor he’s replaced, and repeatedly tell Radcliffe this, and most of the time it’s amiable material if not exactly hilarious. But the confusing aspect to me is that sometimes Hamm appears in the flashbacks to his past, conversing with himself, and sometimes he becomes involved in the narrative in impossible ways, as in one scene towards the end when his younger version is desperate to look something up in a book he refuses to let him, going so far as to eat the page he wanted to see. As this is of course didn’t actually happen I’m not sure what the show’s trying to do, it’s initially funny to see the two versions of the character fight with themselves but given that it didn’t take place I’m not sure of the point it’s trying to make. Perhaps a smarter person than me might understand it, but it left me rather confused, which frustrates as otherwise this is intriguing and quite enjoyable material.

Crossing Swords Season 1 Episode 2
Reviews where I regret being optimistic about a show number seven hundred and twenty two, and boy am I tired of being in this situation. But the first episode of Crossing Swords showed a fair amount of potential, as Patrick took part in a tournament to become a trainee squire, and no longer be the black sheep of his family, sure it relied on swearing and shock humour a little too much but it was often quite silly and daft too. Unfortunately this second episode just doubles down on the shock humour as the king wants to execute someone famous to raise his popularity, Patrick is forced to oversee that, while the rest of the trainee squires are attacked by a Medusa type monster. At the end of the first episode it was suggested that Patrick’s siblings Ruben, Coral and Blarney would be a bigger aspect of the series too, but other than arguing that they should be the ones who are executed they were barely in it, and the rest of the time it was just lots of swearing and weak attempts at being edgy, and worst of all was that it was often fairly dull, so I doubt I’ll bother watching any more of it unless my sources (eg some bloke I know online) tells me it picks up.

The Insecurities Of Dill
This is a great short video where after a bout of sex a guy looks incredibly pleased with himself, but then it appears that we hear all of his insecurities, from the idea that his partner just uses for him for sex, and that there’s never any cuddling, to the suggestion that he’s too scared to leave her as he feels she’s abusive, yet at the same time worries what might happen if she were to leave him. There’s a twist however, as otherwise this might have been one of the bleakest comedy videos ever made, and one which makes it the very funny video that it is as we learn we weren’t hearing from the boyfriend at all, but the thoughts of his girlfriend’s vibrator who goes on to worry “I get these shakes…What if it’s cancer?” and comes out with amusing lines about how “I do my best, and my mother always said you can’t do wrong if you try your best”, which makes me want them to create a prequel where we see him with his parents. There’s some strong material on how Hollywood glamorises most aspects of sex too, and it’s a really cute and fun short in general, carried off extremely effectively, which can be seen here: https://vimeo.com/427137395

Manborg
A very, very low budget affair, I can’t remember the last time I had such a great time with a film as obviously trashy as this tongue in cheek futuristic affair, but it’s gloriously over the top (with some of the overacting being just beautiful stuff) and there’s a huge amount of really great lines throughout. It’s occasionally a little odd as it looks absolutely terrible at times (understandably, however, given the budget), like a dodgy Sega Mega CD game, but then they pull off a really effective shot or moment that impresses a huge amount, but don’t let that put you off, as this really is ridiculously daft fun.

Video Of The Week
Quentin Smirhes has put out a number of videos now, all of which have a “Scarfolk” vibe, a distinctly unsettling seventies feel, and though they’re strange they’re also oddly funny too, though the kind of thing David Lynch would find funny rather than a normal human being might. But normal human being’s are of course rubbish, so as long as you’re not one of those you’ll probably like this a lot.
https://www.youtube.com/watch?v=zxhlQk6Ky5Y&feature=youtu.be

Link Of The Week
Ever wondered how some comedians got their start? Well Insider have put together the perfect article for you then, as they’ve collected together a selection of anecdotes from a number of big names like Jerry Seinfeld, Tig Notaro, Sarah Silverman and Chris Rock, as they talk about their early days in the industry in what’s mostly a pretty fun read. https://www.insider.com/how-famous-comedians-got-started-comics-stand-up-comedy#aziz-ansari-handed-out-flyers-in-times-square-to-earn-stage-time-12