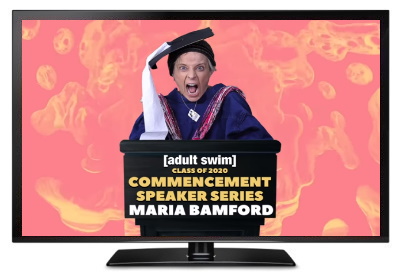 Anyone who is graduating university right now won’t be getting their standard Commencement Speech, which for those outside of the US is a talk at a graduation ceremony often given by a famous alumni that’s filled with cliched advice. But Adult Swim have stepped in to help out by recruiting some of the funniest people out there to give a replacement speech, and over the next week or so I’ll be reviewing each and every one of them, and you can check out my thoughts about Xavier Renegade Angel and Eric Andre’s speeches here.

Maria Bamford
Maria Bamford’s my favourite comedian in the world right now so anything new from her is always met by high expectations, which so far she’s always met and that applies with this latest Adult Swim Commencement Speech too which is an absolute delight. Unlike the ones I’ve reviewed by Eric Andre and Xavier Renegade Angel this is a slightly less surreal affair, but it’s even funnier then they were as Maria gives her speech to one student, Britney (who’s played by Maria too) which is met mostly by disdain.

The Maria we see giving the speech is the one we know and love from her stand up, a deeply honest individual who gives advice based on her experiences. So she talks about how she doesn’t know what she was doing and she still doesn’t, that “I’ve screwed up now in every way humanly possible” and then gives examples of that including her being fired from various jobs, how she’s bi-polar, and even one time where she lived somewhere where the landlord accepted sex for rent, the point being that the main thing she’s learnt is to ask for help, and so it’s not only deeply funny but genuinely thoughtful too.

It’s undercut by Britney mocking her throughout, confused as to why any of this would apply to her as “I’m really confident and I have plans and I’m filled with hope” while also wondering “Why is she the speaker?”, but though Britney’s undoubtedly a fun (and occasionally pointed) comic creation, it’s Maria’s speech which is the real highlight here, as she talks about where you can get help including free 12 step programs, library books, online support groups, and hell, she even “Once called an operator and I got them to tell me they loved me”.

There’s another fantastic (if quite bleak) anecdote about Maria seeing a Doctor as she”Got some pre-cancerous cells removed cause I had some hot times in the late nineties and got HPV”, but after the surgery there was blood pouring out everywhere, the point being “Everybody has bad days at work”, with Maria then ending on one of her own as she tells the story of how she once shouted at someone she thought was a heckler but who actually had cerebral palsy.

So this is prime Maria Bamford then, a mix of startling honest stories and a comedy character that’s beautifully portrayed. Admittedly I’m a ridiculously huge fan of hers but for me this is the best Commencement Speech yet if only because it’s consistently funny from start to finish, and there’s an actual point to it as well so it’s not just surreal madness and all round idiocy, and if you watch any of these shorts this is definitely the one to start with.