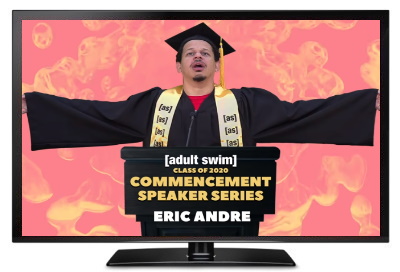 Anyone who is graduating university right now won’t be getting their standard Commencement Speech, which for those outside of the US is a talk at a graduation ceremony often given by a famous alumni that’s filled with cliched advice. But now Adult Swim have stepped in to help out by recruiting some of the funniest people out there to give a replacement speech, and over the next week or so we’ll be reviewing each and every one of them.

Xavier Renegade Angel
Created by the deranged geniuses that are PFFR, Xavier Renegade Angel is famous for trotting out absurd insanity, supposed philosophical thoughtfulness that was largely inane madness, and he does the same here. So you shouldn’t expect it to make much sense as he talks nonsense along the lines of “Strap on your thinking strap on, my mouth’s about to pinch off a loaf of wisdom to fact you in the face”, but the wordplay is nearly always bizarrely funny.

It’s also met by some great visuals too, so for instance when he explains “And you, you think you’re better than me just because you actually are? Your logic is about as circular as a pregnant egg that’s about to get knocked up against your face with the birth of my bouncing baby fist cesarean doggy style” it’s accompanied by some glorious strangeness, and we’re also given a trip in to Xavier’s brain, shown the inhabitants of what looks like Noah’s ark pissing in to his mouth, and what initially appears to be a very young Xavier drinking mouse milk.

If you’ve never watched the series it will no doubt confuse enormously and you’ll probably wonder what the hell is taking place, and I wouldn’t blame you in the slightest as this is outlandish and surreal and doesn’t make any sense if you’re unaware of the character’s nonsensical stupidity. But if you are a fan then it’ll be something you love, especially the psychedelic ending which is an example of PFFR at their most inventive and most deranged.

Eric Andre
In some ways Eric Andre is almost as bizarre as Xavier, as he angrily promises “The gnarliest pre-tape commencement speech of all time”, before exploding. Like Andre’s chat show it lurches from the loud and in your face to the subtle and odd, and pleasingly you never know what’s going to happen next. So one minute there’s a sly dig at the creators of Robot Chicken, the next he’s celebrating the fact that the best part of a virtual graduation is “No school shooters” much to the fake audience’s delight.

An impassioned speech follows where he claims that the graduating students are the future, before demanding they invent all the things Elon Musk failed too. It’s a mixture of the kind of cliche that you might expect to hear from a commencement speech as he says things like they are “the generation that will prove our humanity” before rambling away about how “God and Satan are now one”, that “Don’t be a tumour like a boomer” and how “There is no afterlife you are experiencing spiritual nirvana right here, right now”.

It’s not all random idiocy, sometimes he’s plain silly too, suggesting they follow Jesus Christ’s advice when he once said “Chill the fuck out”, before Andre does a delightfully weird impersonation of Jesus singing, and after he tells a supposedly true story about his first day of college being 9/11 he claims “If I got through it, you will get through this… You will surmount and overcome, trust me… And you know what, get somebody pregnant!”.

Though both are pretty damn weird Andre’s speech is also in many ways very different to that of Xavier’s, but both delight in wordplay and being ridiculously unpredictable, if a gun was pointed at my head I’d probably end up getting shot, but if I somehow survived I’d suggest Andre’s is the funnier but visually it’s less interesting. Both are fantastic though, and it’s great to see these two Adult Swim mainstays back on our screens.