Tv Review: The Other One Series 1 Episode 1 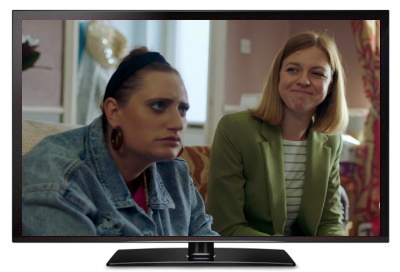 Back in 2017 the BBC aired the pilot to this sitcom where at a surprise birthday party Colin keels over and dies, and at his funeral his grieving wife Tess (Rebecca Front) goes on a bit of a rant as it turns out that Colin had been cheating on her for decades with Marilyn (Siobhan Finneran), and had a daughter with her too. To add insult to injury both daughters are called Cathy, one played by Ellie White (The Windsors) and one by Lauren Socha (Misfits), though to make things a little simpler the latter just goes by Cat.

Written by Holly Walsh (Dead Boss, Motherland) and Pippa Brown (Psychobitches), there’s a fair amount of cringe comedy as Cathy attempts to bond with her half-sister who instantly presumes she’s going to be one of Cathy’s bridesmaids, and Marilyn goes on about her deceased father’s sexual prowess, describing him as “a sexual shire horse of a man”. Meanwhile Cathy’s fiancee Marcus (Amit Shah) sort of cheated on her when he sent a picture of his genitals to another woman, so she’s understandably fucked off about that too, and Tess is dealing with the death with alcohol, lots and lots of alcohol as she’s filled with bitterness over her husband’s cheating.

As pilots go it was fairly strong stuff, perhaps a little too reliant on class clash / odd couple style humour as Cathy’s slightly up herself and posh, whereas Cat’s more down to earth and working class, but it was quite sweet at times too as the two sisters slowly bonded. Perhaps unsurprisingly the first episode is more of the same, as Cat and Cathy become friendly but still have issues with the fact that their father was a cheating shit who lied to them throughout their lives, and Tess is still filled with anger at not just Colin but Marilyn as well.

Though the episode starts off well with the accidental destruction of Cat’s front room window, which she isn’t bothered about at all as she can put the footage up on instagram, the majority of the first half is plot heavy as it sets up the second part of the episode. This revolves around the fact that it’s soon to be Cat and Cathy’s birthdays as coincidentally they were born only five days apart, and though Cathy initially doesn’t want a big affair it spirals out of control and soon everyone’s going out for a big meal, yet these scenes with a fairly uptight Cathy are only intermittently funny.

Once the big birthday party takes place in a restaurant it picks up thankfully, Tess amusingly talks about someone flirting with her by describing it as “It was all very Call Me By Your Name, only without the, you know, anal”, and Stephen Tompkinson is on great form as her slightly twatty potential new love interest. Plus when Marcus explains how sending dick picks has made him realise how lucky he is, he renews his marriage proposal in a genuinely lovely scene of the kind the series needs more of, and which made me wish the episode hadn’t ended the way that it did. Because right at the end it then becomes a bleaker affair as Marilyn and Tess argue about the relationship they both had with Colin, which is a completely laugh free moment and will leave a slightly bitter taste in your mouth.

It’s almost bordering on being a comedy drama at times, and the gag rate in the first half really isn’t high enough, with many of the jokes present of the variety that will make you smile rather than laugh. The initially slower aspect of the start isn’t necessarily something which might put you off as the script is a well written and likeable one, and it’s a show which fleshes out its characters with impressive speed, but I did find myself wishing it had a few more jokes in it, and that it didn’t rely quite so much on cringe comedy.

On that front, how well you get on with The Other One will depend on your tolerance for cringe factor, as this is steeped in it at times, especially when it comes to the relationship between Rebecca Front and Siobhan Finneran’s characters, and on a personal level I wish they’d tone down that aspect down a little. The burgeoning friendship between Cat and Cathy is undoubtedly very appealing though, and if they concentrate on that this will hopefully become a sitcom which becomes funnier, and more likeable, as it continues.

Related Link:
If based in the UK you can watch all of The Other One on the BBC iPlayer.