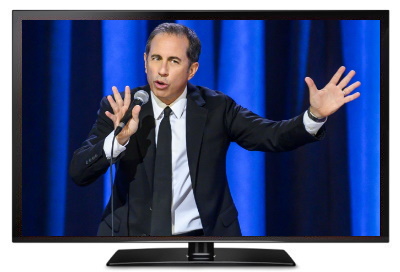 What’s The Deal With This Comedy Special?

On May 5th , Jerry Seinfeld released his stand-up special, 23 Hours to Kill, on Netflix. Lucky for us, it’s a great way to kill one hour of our day.

The title makes you wonder what comedians do with their day when they’re not on stage entertaining us. Well, if you’re Mr. Seinfeld, you put on scuba gear and leap from a perfectly good helicopter into New York’s Hudson River. After this thrilling stunt, he runs to the Beacon Theatre stage in his wetsuit, immediately taking it off to reveal a fancy black suit underneath. You didn’t really think you were going to watch Scuba Steve do comedy, did you? He’s greeted by a roaring orchestra which is quickly replaced by a light blue curtain. The stage is bright, almost too bright, but under all the bulbs, Jerry looks refreshed and damn good for 65.

This hour-long special is split almost in half. The first part deals with observations of the world around him, the other part focuses on his personal life. He rants about silly habits of strangers, friends, and family members alike (though he’s at his best when poking fun at us, rather than his loved ones). He savagely singles out the people we have in our lives who make simple plans (like going to dinner or a show) unnecessarily complicated. “Why are your friends so annoying?” he asks bluntly. While complaining about the ordeal of acquiring tickets to a show, it hits like a scene straight from Seinfeld. Ahh, the nostalgia feels so good.

He touches on the amusing idea that we never want to be where we are. “I could be anywhere in the world right now . . . if you were me, would you be up here hacking out another one of these?” he asks honestly. It first seems a tad arrogant, but he redeems himself when he answers, “Nonetheless, I am thrilled to be here. I love it here. This could be my favourite spot in the entire world.” Of course, this elicits a loud response of, “We love you!” from a woman in the audience, which Jerry politely counters with, “Thank you, sweetheart. I love you too.” You really can feel the love Jerry has for New York, and vice versa. This sincerity is on full display at the end when he acknowledges, “You made me. I appreciate it.”

Seinfeld is fantastic at maintaining his wit and energy throughout the set. He always finds a hilarious way to put into words what we’re all thinking (maybe not so hilariously). His commentary on our addiction to phones, and snapping photos everywhere we go, is on point: “We’re picture addicted. There’s no way to stop it.” Also, he’s right – we do not need instructions for leaving a voicemail. We’ve figured this out a long time ago!

In one bit, he takes jabs at the United States Postal Service, stating how their job is just walking, licking things, and dealing in odd numbers of pennies. These jokes might seem ill-timed, as we now rely on mail delivery more than ever, but keep in mind this was filmed back in October. Plus, it’s damn funny.

When he begins cracking jokes about his late marriage at 45, and raising three kids (described as things he needs to get out of the house), it drags a little. It’s classic “wife vs. husband” scenarios that too many comedians have already tackled. However, his impression of a woman mimicking a man’s voice is spot on. Anyone in a relationship can feel the frustration with the loaded statement, “I don’t like your tone.” He brilliantly summaries marriage as, “Two people trying to stay together, without saying the words ‘I hate you.’” In the last few minutes, he circles back to the fact that everyone sucks, and oddly enough, we can all take comfort in that. An abundance of comedians have also done this, but Jerry is quite seasoned at it.

It’s nice to witness a veteran comic pack a solid punch this late in the game. It’s somewhat dated, but overall, this special succeeds in doing what all comedy should – making you think while giggling aloud. I lost track of how often I exclaimed, “Ha! He’s right.” If you like Jerry Seinfeld the person, or Seinfeld the show (and really, who doesn’t?), then this will bring you one hour of joy. The other 23 are up to you.