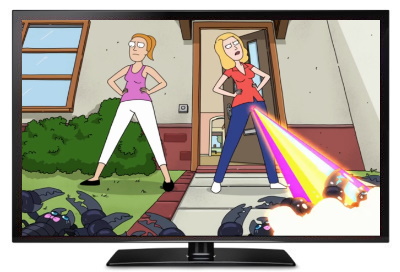 A very brief history of Rick and Morty for those not in the know – many hundreds of years ago (or back in 2013, anyhow) creators Dan “Community” Harmon and Justin “House Of Cosbys” Roiland made a show which essentially stole the main two characters from Back To The Future but made one of them a sociopath and the other a sex obsessed teen, and it was adored by many, including a few slightly too obsessive idiots who spoilt it for the rest of us. Most of the time it was truly fantastic and hilarious, but it also had the occasional dodgy episode in among the brilliant ones, but suggesting that could get you torn apart limb from limb by those aforementioned stupid types.

The latter is what makes reviewing the show a slightly daunting prospect at times, I even received very angry comments on facebook when I was critical of the rather poor comic based on the series, which is never pleasant to see unless you enjoy hearing about how strangers wish misery upon you. But thankfully I shouldn’t receive any hate mail about this latest episode, the first since last December, as it’s one of the best ever episodes of Rick and Morty, a kind of anthology episode that episode writer Jeff Loveness (the underrated The Onion News Network series and Miracle Workers) uses to make comments about the nature of the show, storytelling in general, religion, capitalism, and various other pretty weighty topics, which he does while never failing to be incredibly funny throughout.

The framing device is that it appears that Rick and Morty are stuck on a train which is filled with a number of individuals who are obsessed by them, be it that they want to kill them, make love to them (well, Rick at least), or just celebrate the fact that they saved Christmas. All of which is clearly crazy and something is going on behind the scenes, and that something is the Story Lord, an impressively ripped type who wants to use all of the potential Rick and Morty have for his own nefarious means. And naturally it’s not even that simple, but giving away the big reveal would spoil one of the best moments of the episode.

The structure allows Loveness and the writing team to play around with the format of the show in delightfully crazed and unusual ways, this is a series which has been pretty meta from the get go but it’s never quite been as extreme as this episode is. So yes, we get callbacks to previous episodes and appearances from much loved characters, but it never feels like fan service (well, bar maybe a brief appearance from Bird Man) and more a way of exploring the way stories are told and the devices used. Best of all for me are the moments where the show criticises itself, with Morty forced to try and tell a story that the series has never managed to do before – which involves passing The Bechdel Test in a beautifully funny scene which is one of the most bizarre things the show has ever done, as Morty’s tale is weirdly period obsessed and reveals that Morty doesn’t quite know what they are or how people are born.

It also serves as a celebration of the series, of how inventive it is, how deeply funny these characters can be (and it’s genuinely lovely when they briefly take the time out to congratulate each other on the form they’re on), but of course it’s also a deeply cynical series too and so ends on an ode to capitalism from Rick, and the only disappointment is that the website it advertises doesn’t actually exist.

My favourite episodes are the ones which screw with the nature of reality, that play with ideas of what the show is capable of, but also highlight how insanely inventive it can be, how it’s concept allows writers to explore all manner of different ideas, and Loveness and co do so here with aplomb. It’s perhaps not a great episode to introduce the show to newcomers with, but fans will almost certainly adore it, and with good reason too.