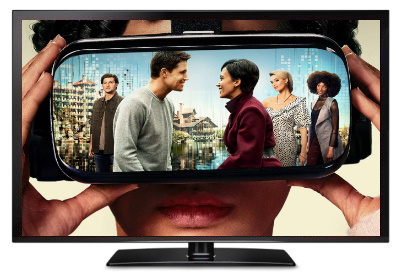 Any new comedy by Greg Daniels is normally something to become excited about as he’s the man who wrote many classic Simpsons episodes, co-created King of the Hill, and then went on to produce The American version of The Office and co-create Parks and Recreation with Michael Schur. Now he’s finally back with a new series, and like Schur he’s made a series that revolves around the afterlife, though this couldn’t be any more different to Schur’s outstanding The Good Place.

Set in a fairly attractive looking near future where there’s self driving flying cars and food replicators, the biggest difference however is that heaven exists – or a virtual reality style heaven, anyhow, where if you’re dying if you’re rushed to the upload room in the hospital in time your head will be incinerated and your consciousness uploaded to whichever version of the afterlife you can afford.

The lead character is Nathan (Robbie Amell), a coder who seems to have an idyllic life, sure he might not be in love with his girlfriend Ingrid (Allegra Edwards) but he certainly is in lust, and he’s working on a free version of the afterlife which should make him an insane amount of money. But then he’s clearly assassinated – not that the show tells us that outright in the first episode but his self driving car crashes in to a truck that it fails to recognise, and when Nathan arrives in Lakeview, a very impressive and expensive afterlife service, some of his memories are missing and he has no memory of the afterlife he was coding.

That’s only one of his problems though, as Lakeview costs a lot of money and right now Ingrid is paying for everything – and a good few things are “In App Extras” and so unavailable for free – and there’s a fair few signs that their relationship isn’t going to last until she finally gets around to dying herself in fifty or sixty years time. At least he has his “Angel”, Nora (Andy Allo), a coder on Earth who’s around to help him get used to being dead, something we hear about 40% – 60% of those who are uploaded fail to do, and a romance between the two is clearly coming to a tv screen / afterlife near you very, very soon.

This first episode is a mostly gentle affair, setting up the concept of the series and introducing us to the characters, and Daniels initially makes both worlds seem pretty appealing. Sure not everything’s perfect, when Nora has a meal with her Dad the food tastes shitty as his fat cartridge is low, and there’s a comment about the lack of hot water which hints that something’s up with the future, but most of the time the world looks pretty damn attractive, and that applies with the afterlife as well.

It’s these scenes that tend to have the funniest moments in them, from Nathan’s joy that he can urinate anywhere in the room and still hit the urinal to his pleasure at the fact that he can change the weather at a press of a button. The way heaven is flawed is pretty funny as well, and the idea of sentient adverts in Heaven is an amusing one too, albeit a deliberately slightly chilling prospect.

That aspect of the series is also hinted at elsewhere, unlike Michael Schur’s take on what happens when you die this might have a surface level of optimism circling it but there’s a hell of a lot of darkness lurking throughout the episode. Nathan’s untimely demise is the most obvious element of this, and who was behind it is surely going to be a big part of the series, but the way he so quickly considers suicide seems pretty bleak, as is the way the afterlife is monetised, and I really can’t wait to see how the show explores these themes and ideas over the course of the series.

It’s always easy to get carried away with a great first episode of a series of course, and fun too, but there’s enough going on here to suggest it should be a fascinating journey, though whether or not the dramatic elements will overshadow the humourous ones is open to question. Either way we should be in very safe hands with Greg Daniels, so if this does go off the rails and disappoint then it’d be a huge surprise.