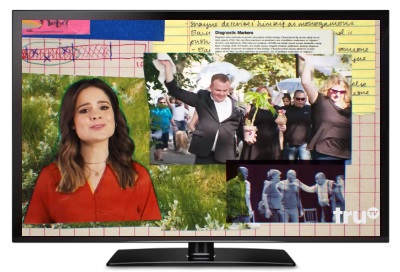 It’s Personal With Amy Hoggart Season 1 Episode 1
The central concept of this new TruTv comedy is that former Full Frontal With Samantha Bee correspondent Amy Hoggart is going to help people despite having no training or experience, but she claims she has no choice “Because life is hard, and I’m nice. When you hurt, I hurt, and if you need help, I need to help you”. In this first episode she visits Laura in New York who fears her lack of a sense of humour has lost her opportunities when it comes to work, and after a vaguely interesting and amusing chat with her, Hoggart then talks Dr Jyotsna Vaid from Texas A&M University about the nature of humour, why certain jokes work, and whether or not you can train people to produce humour, and the rest of the episode flits between “helping” Laura and examining the nature of comedy. The show has an occasionally deliberately patronising or mocking tone to it, especially when Amy attends a comedy workshop with a bunch of business types, but most of the time it’s a good natured affair and Hoggart clearly does want to make a difference to Laura’s life. That said it’s still a comedy tv show and so it contains some mostly amusing stunts, like Amy organising a dinner party for Laura to show off her story telling skills, and best of all is a short investigation in to how people respond to men and women being funny, with Hoggart delivering the same routine dressed as herself and then as her male twin (with her fake beard not being the most convincing thing in the world) to two different focus groups. There’s some elements of cringe comedy, when Laura tests an anecdote on her sister it’s overly dramatic and a little painful to watch, but it ends in a nicely upbeat manner with the dinner party and Laura being a hit, by this point her delivery of a story about a carnivorous chipmunk is a lot more natural than when she started out and the ending is rather sweet. As a whole it’s a show that definitely has some merit then, certain sequences are amusing and it offers up some interesting suggestions as to why some people are great at telling jokes and some people aren’t, and I’ll definitely give it another go to see what Hoggart will explore in the future, but at the same time I’m not convinced it’s something which will be essential viewing or up there with the best TruTv shows like Jon Glaser Loves Gear and At Home With Amy Sedaris.

Mike Tyson Mysteries Season 4 Episode 20
This Adult Swim animated comedy has been pretty fun over the years as Mike Tyson is ridiculed and shown to be a thick old idiot as he investigates various mysteries along with a pigeon (voiced by Norm Macdonald) who offers a mocking commentary, at least when he’s not sexually obsessed and being shockingly twisted. Added to this is Jim Rash’s often flamboyant and sarcastic (but also caring) Marquess of Queensberry and Tyson’s supposed daughter Yung Hee, who is the only rational individual among the lot, and it’s been a group of characters who have generated a lot of laughs. But now the series feels like it’s running out of steam a little, not that the season finale was in any way bad but the show seems to mostly go in two directions, that of investigating something which turns out to be deliberately rather drab and boring, or an event ridiculously over the top and fantastical, and this episode contains both as it begins with a trivial investigation where a woman asks for help with her haircut before suddenly revolving around the Marquess being brought back to heaven where he’s finally going to be given his angel wings. Despite the outlandishness of that second plot it’s all a bit monotonous though, Pigeon makes a whole bunch of sexual innuendos and trots out some offensive nonsense relating to All Gender Toilets, Mike goes on and on about needing a shit, Yung’s the butt of too many jokes (especially relating to her haircut), and though the episode picks up when we meet Gabriel in heaven and it turns out he’s a muscle bound Australian, and God pops up briefly, I failed to find it that amusing and the ending was rather annoying. The latter criticism applies to a fair few episodes from season four too, and given the repetitive nature of the concept while the show has had a good run, and the majority of the seventy episodes produced definitely have some value, I definitely think now’s a good time to call it a day.

The Simpsons Season 31 Episode 1
As much as I’ve defended The Simpsons over the years it’s now got to the point where I only watch the episodes The AV Club give a rating of B- or above, and even then they’re not always that great, hence why I’m only starting the latest season almost six months after it started. As a long time fan it is akin to comfort tv for me though and I was in the mood for such a thing during these worrying times given the madness relating to the Corona Virus, and so I’ve now begun viewing it, and for once there was another reason to finally watch the show as John Mulaney was the guest voice, and boy do I love that man a worrying amount. Plot wise it was a fairly engaging episode where after Homer hosts an online sports talk show Bart interferes and their violent antics make them a hit, and so a youtube PR expert (Mulaney) gets involved to help them monetise their brand, the best thing about it being that after a few fights Homer and Bart start enjoying each other’s company for once, which makes for a pleasant (and quite sweet) change. A subplot with Lisa being sent to detention is fairly throwaway but has some cute gags revolving around the privatisation of everything relating to the school, and in general it’s a strong episode with some great visual gags, the snake that ate three pool balls making me laugh the most, but Homer renaming Moe’s Bar and the latter’s comment “I respect the greed” was a great moment too, as was Kent Brockman’s line “And in other news, the pope has died”. Surprisingly Mulaney’s character ws one of the weaker elements, amusing enough but not that great, but all in all it was a decent episode and I definitely won’t wait so long to watch the next well reviewed episode.

The Pirates! In An Adventure With Scientists
A very underrated Aardman effort, I’m extremely fond of this as it’s a funny, smart and delightfully inventive flick with a plot that lurches around all over the place in a very amusing fashion. It was the first film I saw in 3D and I was really surprised by how good that was as well (despite being sceptical of the whole thing previously), it certainly makes it look even more visually impressive than your standard animated fare, so if you can catch it in that format I’d recommend doing so.

Video Of The Week
Daniel Kitson is one of the greatest comic writers and performers the country has ever created but frustratingly he rarely makes any of his older shows available to view, though that is slowly starting to change with the majestic “It’s Always Right Now, Until It’s Later” online to rent, and now he’s put Analog.Ue up on his website. It may not be on the site for long though, Kitson’s unpredictable like that, so I’d recommend watching it asap. https://www.danielkitson.com/analogue

Link Of The Week
The situation with the Corona Virus is of course all kinds of depressing, and understandably a lot of gigs are being cancelled right now, if you want to see if something you’re attending is still taking place I’d recommend checking out Chortle’s guide to those which are sadly no longer taking place. https://www.chortle.co.uk/features/2020/03/12/45608/coronavirus%3A_which_comedy_gigs_have_been_hit%3F

The Free Online Stand Up Show Guide – A selection of links to full shows that are free to view.