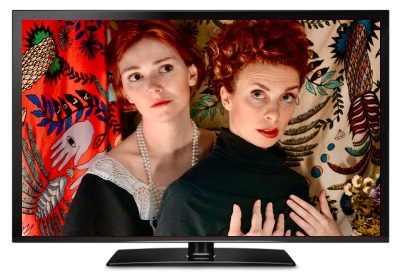 I have a series of strange memories from childhood – accountable but weird and embarrassing – which form some of my earliest experiences of performance. What would happen is, three of my cousins and I would watch Teletubbies. At the urging of the most flamboyant cousin, each of us would be assigned a respective Teletubby, and we would perform a bizarre real-time re-enactment of the show, facing away from the screen to an empty living room, glancing over our shoulders and trying to keep pace and perhaps even anticipate the characters for whom we were the real-world avatars. Once or twice we invited parents in to be our confused and angry audience. I was usually Tinky Winky.

As an act of artistic investigation, it still feels pretty avant-garde to me, 25 years later, and it’s definitely weird, but I bet a lot of kids have something similar in their regrettable past, and it provides a protean common ground with Elf Lyons and Helen Duff’s dizzyingly complex (and much more effective) exploration of Leonora Carrington, one of the 20th century’s greatest surrealist artists and authors. Lyons and Duff are two of the most accomplished clowns in the country right now, and Lyons in particular seems to be going through a period of exciting creative fecundity: as well as Unlikely Darlings she’s building a solo work in progress and created a hot ticket last month with her horror comedy Gorgon, also at the Vaults.

Tonight the two friends are working on something very odd. In a squint of Carrington’s visual style they’re dressed as “beautiful ladies” in bold black and red capes with spoon-shaped heads, and begin by laying down a primer for the ideas in the show. What is it to be surreal? (As opposed to just practising surrealism, you might say.) Why is being silly different, and why is that difference gendered? It’s a fascinating and very funny introduction to a feminist history of surrealism, but we’re missing the point if we’re expecting a comedic lecture on art history like Hannah Gadsby might give us. This is just as much an interpretation and a summoning, as Duff and Lyons slosh between biography, dramatisation and theory, enacted by a hyena with three large prosthetic nipples and a naked woman in a horse mask.

One of the many interesting things about this approach is the way in which most of the potential accounts of Carrington inevitably collapse and are pushed aside. A handsome audience member is armed with one of Carrington’s own quotes to veto any analysis before it gets boring, and Duff brings the biographical sections to a close by railing against dated readings of women’s art that focuses “on the personal instead of the professional.” Should Carrington’s gender even be discussed with regard to her art and life? At one point, with every other angle of examination stripped away, and lacking the rights from the Carrington estate to actually show the material, Lyons and Duff are breathlessly re-enacting paintings with just two bodies and a running narration, and it was at those points that I was forced to think about being a Teletubby, and the ways in which a clown’s imitation can highlight something fundamental in a person or text without bearing much resemblance to its source.

Duff’s point about looking beyond the personal in examining the art of women is a good one, but takes on extra dimensions with regards to Carrington, who treated her own biography like a stand-up’s work in progress, propagating outlandish stories about slathering mustard on her feet at fancy restaurants and being rescued from a Spanish asylum by her nanny in a submarine. For her, the personal was professional, as it becomes with a lot of artists. Still, the feminist account is one of the sharpest approaches in this fantasia, bringing to light a problematic history of surrealism in which the patriarchy tried to co-opt even nonsense and reduce female artists to the status of muses.

But as we should all know by now, “GIRLS OWN THE VOID,” and it’s a fantastic thing to see Lyons, Duff and Carrington reclaim the void of meaning at the heart of surrealism, for women artists and clowns everywhere. This is an impulsive, playful and deeply intelligent show, and an exciting preview of the future as described by Carrington in The Hearing Trumpet, when “the planet is peopled with cats, werewolves, bees and goats. We all fervently hope this will be an improvement on humanity…”

Related Link:
Elf and Helen are at the Vault Festival until Friday.