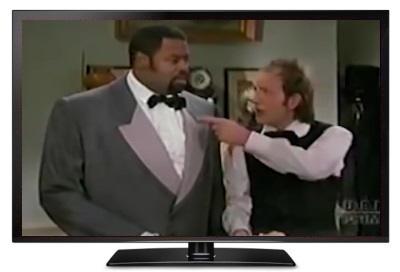 At the very beginning of this sitcom we’re given a quote from Shelby Foote’s book “The Civil War” that states “The Civil War defined America. It was the crossroads of our being, and it was a hell of a crossroads” before the question is asked “Who would have thought there was a comedy in all that?”. It’s a good question too, a couple of sitcoms have occasionally touched upon the civil war in the past (Adam Pally’s Making History, for instance) but this is the only one which completely revolves around it.

Then we’re informed that “The Secret Diary of Desmond Pfeiffer” supposedly exists and that it chronicles the life and times of a member of President Lincoln’s staff at the height of the Civil War, and the twist is Desmond Pfeiffer (Chi McBride) is black, and his man servant (and part time foot rest) Nibblet (Max Baker) is a white idiot. Known as “UPN’s Slavery Sitcom”, I presumed when I first heard about it that it was horribly misguided, especially as only four episodes of the nine filmed were ever aired before it was removed from the airwaves and it’s never been released on dvd. And it is, though not for the reasons I originally was led to believe.

When the action finally starts we meet Desmond and Nibblet searching for Thomas Jefferson’s secret treasure in the White House kitchen, eventually they find it and discover it’s an expensive ring, with Desmond elated that he can pay off his debts as he’s hooked on “Indian Bingo”. But then Abraham Lincoln (Dann Florek) walks in and makes jokes about his wife eating all the food, and Mary Todd Lincolm (Christine Estabrook) complains that Lincoln’s not fucking her (or words to that effect) before taking the ring for herself. It’s all kinds of painfully unfunny, but I was hoping it might improve, and perhaps if you like fat jokes at the expense of women you might find it funny, but you might also want to put your head in a gas cooker.

After this Ulysses S. Grant (Kelly Connell) flirts with a sexy secretary and Abraham Lincoln confesses that he’s never been with anyone other than the First Lady, and he’s desperate to have sex with someone else. In case you weren’t annoyed by this sequence there’s some more jokes at the expense of Mary Todd Lincoln, and some tedious foot fetish gags, because this is a sitcom that seems to have been written by people who always go for the obvious joke rather than writing anything original or inventive.

Throughout the episode Lincoln’s portrayed as a sex pest obsessed with “Telegraph sex” (the one vaguely amusing concept in it), and there’s a joke about being catfished (albeit not using that term) by a fat woman, because the writers do sure seem to hate any female who isn’t model thin, the tedious cunts that they are. Somehow if anything at this point it just gets worse as there’s yet more horrible gags at the expense of Mrs Lincoln as Nibblet tries to take back Jefferson’s ring from her while she’s in the bath, using a similar set up to the infamous Mission: Impossible scene with Tom Cruise being lowered down on a cable to hack the CIA, which has the potential to be funny, but nah, of course it isn’t given how talentless these scribes were.

Following this are a couple of jokes which were obviously supposed to make fun of Bill Clinton, with Desmond commenting on Lincoln’s infidelity as being akin to the actions of “Some hillbilly from Arkansas”, but it’s dull satire which is all a bit bland. Which shouldn’t come as a surprise to anyone who’s got this far in to the article, as the laziest of jokes are the order of the day each and every time and while it may have been taken off the air because of perceived racism it deserved to be cancelled due to just being plain rubbish.

It feels influenced by Blackadder in the way Desmond has to look after an inept authority figure while having an idiot servant of his own, and the lead character certainly bares some resemblance to Rowan Atkinson’s much loved comedy character as he schemes to improve his own situation, but apart from the set up there’s no other similarities and it lacks the amazing performances that Blackadder was blessed with, the smartness of the plotting and the wittiness of the dialogue too.

On the plus side there is no dodgy racism or jokes about slavery in this opening episode and the lead character is the only one who’s even vaguely competent, with the white characters all ridiculously stupid, annoyingly vain and completely sex obsessed. Unfortunately that doesn’t excuse the amount of fat jokes within the episode, they’re also not even close to being funny, and the show’s attitude to women is pretty appalling with them all either being self-obsessed or (quite literally) whores.

Because I’m a masochist I did watch the three other episodes that aired as they’re available to view on youtube but there’s truly no point in describing the show any further. All of them are examples of tired, shitty humour, women are repeatedly the butt of the joke, and there isn’t even a hint of anything of any value in the slightest. One of the worst sitcoms I’ve ever seen all I can say is that thank god the viewing public felt the same way, and that the world was only subjected to four awful episodes of this trite cunty nonsense.

Related Link:
You can watch the series on youtube here.