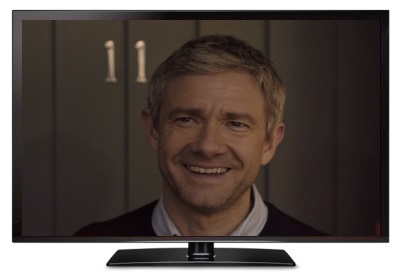 Breeders may just have been the bleakest comedy drama I’ve ever seen, where two parents have to put up with the insanity of bringing up two children under seven years old, and boy are they struggling with it. To a certain extent you can’t blame them, the kids refuse to sleep at night and one of them is obsessed with the possibility of the house burning down, but at the same time that doesn’t excuse the way Martin Freeman’s character deals with them.

So as much as it’s an exploration as to what a nightmare parenting can be, a large aspect is Martin Freeman’s character Paul’s issues with anger, he isn’t exactly a typical father figure what with the way he screams “I’ll fucking go. I don’t give a shit” at the kids when they’re fighting, and later confesses to his father that “I am medically deranged when they wind me up”, before going on to blame his parents for dealing with each other in a passive aggressive manner rather than a full on screaming match. It’s not fair, but then Paul’s clearly at times a pretty unpleasant character (as he admits himself), he might be trying his best but it really doesn’t take much for him to snap.

Daisy Haggard plays the equally long suffering Ally, she’s better with the kids but still clearly not enjoying life, when Paul comments “Ever feel like your brain is gonna be sick in to your own skull?” she responds that it’s something that she gets relentlessly most days, and in a conversation with a friend expresses the idea that it’s impossible to be happy when you have kids that young. It’s a cynical, bleak view, and certainly not something that I’ve found always to be true when it comes to those I know with children, but in the eye of the storm when you haven’t slept properly it is understandable for her to have such a response.

It’s not all barbed comments about how much they hate their children and distressing scenes of poor parenting, there are some funny moments like when two binmen stage an intervention as they’re concerned as to how much Paul drinks, while a couple of flashbacks to before they had kids, and the birth of their children, are sweet in nature. Ally’s co-worker and friend Darren (Patrick Baladi) gets the odd amusing line too as he laments his own inability to have children, but these scenes of light relief are few and far between in this first episode as Paul and Ally attempt to deal with their children’s various issues.

It’s a stark, honest and impressive piece of television, and while not the experience every parent might have, it is one that some definitely will and I found myself feeling that it’s something that any person considering having children should be forced to watch. But at the same time I will never watch another single second of this, which admittedly is for personal reasons but I made a decision not to have children years ago because I thought this was what parenting would be like, and I have no urge to witness the misery any further. Or the cruelty that Paul inflicts upon the kids for that matter, sure it’s just verbal but it’s still fucking horrible, and something I just have no interest in watching.

Despite that I do recognise that this is a great piece of comedy drama, the acting is astonishingly good from both leads while the supporting cast are more than pulling their weight too. The dialogue is smart and insightful, and if you have a tolerance for viewing children making their parents abjectly miserable, and the parents being all kinds of shitty, in ways which are smartly written and with dialogue that is mostly funny, it is a series which you might enjoy much more than I did.