Oh, The Humanity! The Jurassic Games 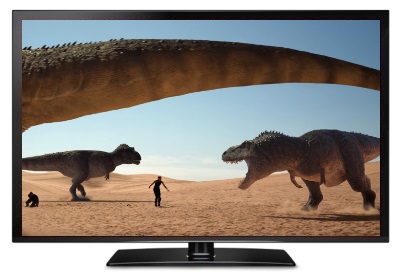 Recommend to me as a “So bad it’s good” kind of b-movie, you can probably guess from the title what this is all about as it mixes together Jurassic Park with The Hunger Games. Cue a bunch of convicts on death row who get the chance to take part in a selection of games with the final survivor getting a pardon, all of which amounts to lots of running about and trying to survive as the film uses the framing device of a reality tv show to present all of the action, and tries to insert a bit of satire concerning the nature of reality tv as well.

To add a couple of very, very slight twists to proceedings the whole thing is a virtual reality affair, meaning that the producers can throw in dinosaurs whenever they so choose, and when one of the contestants dies in the game he’s given a lethal injection and so dies in real life. And so there’s at least one vaguely sympathetic character one of the contestants is clearly innocent, and there are protests against the tv show with one of the production crew attempting to screw things up for everyone, but most of the time it’s just lots of running away from dinosaurs and the contestants either shouting or killing each other.

It’s a mixed affair sadly, which frustrates as it does seem like some effort has gone in to the script rather than it being tossed off one drunken evening by some bored writer for hire. Every so often it contains a witty one liner or scene, the best being a toy commercial for action figures of all ten of the contestants (even the one who died within seconds of the games starting) which is nicely absurd, but unfortunately most of the humour comes from the behind the scenes of the production, and when it focuses on The Jurassic Games themselves it’s disappointingly bland.

As well as the contestants being rather annoying types who just aren’t that interesting (which includes the supposedly innocent bloke), the movie annoys because it’s lacking on the dinosaur front. We get to see a T-Rex eat someone early on but then apart from a couple of raptors making a brief appearance twenty minutes later it’s just the contestants facing off against each other in fairly boring ways. Then once again there’s long gaps before we see another giant lizard, and even the ending only has a few of the scaly bastards.

It’s a shame more effort wasn’t put in to it as there’s enough positive elements here to suggest that the writers and director could create a really enjoyable film, there’s a very funny moment when an Asian guy gets to do lots of martial arts in a fight against three raptors, one bloke gets killed suddenly out of the blue by a weird giant mutant venus flytrap thing while another contestant is eaten by a fuckload of giant bugs, and some of the interactions between the producers of the show amuse. But overall it’s not really worthy of anyone’s time as the satire is only partially effective, and as a comedy action film it’s just not inventive enough.