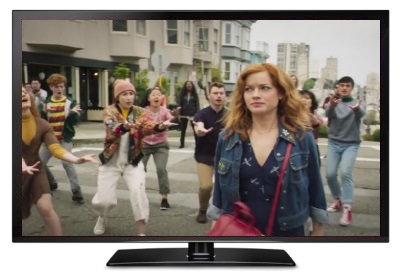 On April 5th 2019 the world became a slightly darker, grimmer place, and no, it wasn’t anything Brexit or Trump related but because Rachel Bloom’s all kinds of lovely Crazy Ex-Girlfriend came to an end. A musical comedy drama that was filled with insights about the human condition (especially when it came to pretzels, but also love and the nature of mental illness) it’s the best show the CW Network has ever made and it’s rare a day goes past that I don’t miss it.

But now a new musical dramedy (and yes, I do hate that word, but my attempts at making “Comama” a thing have sadly failed) has hit our screens, and shares a cast member with Crazy Ex-Girlfriend as the season 4 version of Greg (Skylar Astin) has a leading role. Created by Austin Winsberg (something called Jake In Progress, and he also wrote a few episodes of Gossip Girl), and starring Jane Levy as the titular character, the twist here is that she has the ability to hear the secret thoughts and feelings of the people around her as song and dance numbers.

The way this all kicks off is due to her complaining about headaches and eye pain, initially she worries that she might share the same condition that her father Mitch (Peter Gallagher) has as over the past year he’s suddenly stopped being able to speak or communicate in any way (with Mary Steenburgen turning in another great performance as her very sympathetic mother Maggie) but one MRI scan and an earthquake later and bang, her brains all musically magical.

Sarcastic and stoned neighbour Mo (Alex Newell) is initially quietly amused to hear it all but is soon on hand to explain the concept of the show as the songs Zoey hears may be people celebrating their lives, but could also function as a cry for help, and if it’s the latter Zoey has to step in and stop tragedy taking place. In the pilot this is initially shown with the example of one her co-workers / potential love interest Simon (John Clarence Stewart) suddenly singing Mad World (the Gary Jules / Donnie Darko style version, so we know someone’s horribly distressed and probably like to kill themselves asap) and as Zoey is all kinds of lovely she solves all his issues within a couple of minutes

Fortunately for Zoey hearing the songs doesn’t happen constantly, it’s only one song at a time so she isn’t driven completely insane, somewhat miraculously everyone has bloody lovely singing voices so she isn’t assaulted by horrendous karaoke versions of the numbers, while to stop the show being about three hours an episode the tracks are normally only short snippets rather than the full length effort. All of which makes it easy to mock the show and it’s ridiculous concept, but the writing and performances are so strong in the pilot that I’m willing to overlook such a thing currently at least.

The script is pretty knowing and there’s the odd tongue in cheek line about the nature of proceedings, as well as Zoey’s family issues there’s also a will they / won’t they romantic element with that depressed co-worker who unfortunately for Zoey has a fiancee, though I have a feeling they’re clearly not going to be a series regular. And like Crazy Ex-Girlfriend it deals with mental health issues in a mostly careful manner, a couple of scenes are tackled in a slightly sledge hammer-esque way but as this first episode has so much to do I can understand why it’s lacking in subtlety, nd at least it is addressing such a complex issue so it deserves kudos for that.

The way it deals with Mitch’s illness is a little questionable however, it’s borderline saccharine as Peter Gallagher suddenly bursts in to a rendition of True Colours and Zoey’s actions allow him to move his hand for the first time in months, and I’m not quite sure it works. It will without doubt have to be very careful as to how it handles such a serious condition in the future, and I hope it doesn’t feel too contrived in the way that it does here. Also on the contrived front, though a far lesser complaint, is the way Zoey’s helping out Simon solve a coding problem and get her a new job, but once again as this is the pilot I’m prepared to let it slide this time.

So despite some minor concerns Zoey’s Extraordinary Playlist definitely does show a lot of potential, the majority of the writing is strong and Levy is an incredibly appealing lead while the supporting cast are uniformly excellent too. Whether or not the concept can be stretched effectively over network length seasons is open to question, and I do wish this was an original musical rather than a jukebox one, but right now this series could be something pretty damn fun, especially if it grows and matures over time in the way that Crazy Ex-Girlfriend did.

The Free Online Stand Up Show Guide – A selection of links to full shows that are free to view.