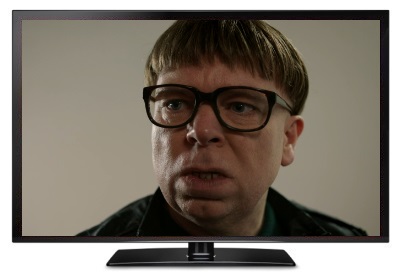 Last week’s Inside No.9 was the first I hadn’t particularly enjoyed, the plot was a little contrived and the humour crass, and simply because there’s so many other series on right now I hadn’t planned to review it again quite so soon. But due to the nature of the episode and just how much I loved it I found myself with no choice, especially as it contained such a (very, very pleasant) surprise.

Initially it seemed like a haunted house / flat set up, with Beattie (Jenna Coleman) and her boyfriend Sam (Kadiff Kirwan moving) in to their new home and unusual events taking place, but pretty early on I predicted that there was going to be a much bigger twist if only because they laid the horror tropes on a little thick, with inanimate objects suddenly appearing where they shouldn’t and table tennis balls bouncing on the ground out of nowhere. But I didn’t for a second guess that it would involve a major character from Shearsmith and Pemberton’s previous series Psychoville turning up, in the form of David Sowerbutts as he used to live in the flat.

It was a relief too as I have to confess that I’m no fan of Jenna Coleman’s, feeling that she’s the worst companion Doctor Who has ever had (and I was alive in the eighties during the Colin Baker era), and though she’s fairly okay here that most of the episode revolved around David and his unusual relationship with his mother Maureen was definitely to it’s benefit. I don’t know how the episode would play out to anyone who hasn’t seen Psychoville but I imagine most would still love it, if only because it showcased Shearsmith and Pemberton’s perverse sense of humour so beautifully.

Among the many, many highlights were Maureen and David once again dancing together (which admittedly wasn’t as fantastic as the infamous Tina Turner scene in Psychoville, but it was still bloody great), them playing “Guess The Serial Killer” together, and the truly grim (but still funny) urination scene. And even though Maureen’s one of my favourite characters once she died the episode still delivered, with Emily (Sarah Solemani) a suitable replacement and it was an episode packed with deliciously twisted lines, and even the odd sweet one too like when David mutters “I wish I could kill death. Then he wouldn’t be able to kill you”.

A couple of jokes were a bit hacky – with Maureen asking “What did your scoutmaster used to say to you?” and David responding “Don’t tell anyone” making me groan, it’s the kind of gag which is decades old. But the majority were pleasingly deranged, and examples of Shearsmith and Pemberton at their very best, and utterly unpredictable too with the moment Maureen confesses that she has watched the Queen do a poo (she takes ages, allegedly) making me roar with laughter.

The episode contained some of their greatest horrific elements as well, with the scene where David was about to boil his newborn son John truly unsettling, and even if the final scenes were perhaps unneeded the resolution to David’s story made me grin. Sure, it could be considered fan service (the appearance from Mr Jelly especially) but when it’s this darkly funny I’m happy for Reece and Steve to do such a thing again and again.

Related Links:
If based in the UK you can watch the episode on BBC iPlayer here.
Our review of Season 5 Episode 1.
Our review of the live Halloween Special.