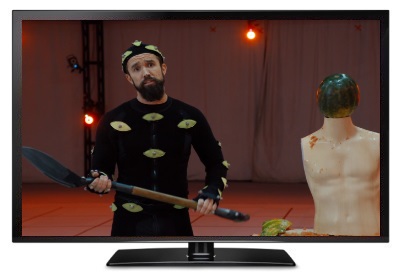 Over the past few years the cast of It’s Always Sunny In Philadelphia have been spreading their wings a little with Charlie Day off starring in the Pacific Rim movies (among others), Kaitlin Olson taking the lead in The Mick, and Glenn Howerton producing and acting in A.P. Bio, all of which it could be suggested has been to the detriment of It’s Always Sunny as the last two seasons have been patchier affairs. And now it’s Rob McElhenney’s turn as he stars in this new Apple Tv+ series, which he’s written along with his Always Sunny co-star Charlie Day and Community and Always Sunny writer Megan Ganz.

It’s an efficient if slightly clunky device, though at least afterwards when it turns out we’ve been watching a commercial for the new expansion the other characters are given the time to mock it and there’s finally some funny moments. Then after that the main plot of the episode kicks off where Poppy wants to introduce a new item in to the game, a spade which allows players to sculpt the landscape Mindcraft style, but the men being men instantly see it’s potential as a weapon, much to the distress of Poppy. Cue a lot of arguing, and a fair bit of scheming which involves Pootie_Shoe, a Youtube influencer type, who Brad describes as “A real piece of shit. But he’s a piece of shit with ten million followers”, who in the best line of the episode describes his Mum as an employee, and who the spade is leaked to by Poppy in the hope he’ll be a fan.

Sort of like Silicon Valley but set in the gaming world, the main difference here is that they’re successful from the get go, but otherwise it has a fair amount in common as it features a selection of battling egos as they argue a lot about what’s supposedly best for the game, but at least in Ian’s case you can’t help but feel it’s all about control too. In the end it looks like Poppy’s going to win, but Ian goes behind her back and makes it in to a weapon, because yeesh, men sure are toxic, and this is despite Ian supposedly being woke and supportive of women in the company.

As plots go it’s not that gripping but it serves it’s purpose and sets up the characters in an effective manner, though I’m not convinced they’re delivering on their potential yet. There’s some nice ideas in the episode, the way every one uses the HR Manager as a therapist being the strongest, and F.W. Murray’s lead writer has a couple of great lines which suggest he’ll develop in to a pleasingly weird character, but it feels a little restrained, like they didn’t want to go all out this early on in case it alienated the audience.

That’s understandable, and pilots are rarely representative of how a series will develop over time, certainly the one for It’s Always Sunny isn’t that great at all and it wasn’t until it’s second season that I really started to grow fond of the show. But Mythic Quest: Raven’s Banquet definitely needs to be a bit funnier, not that the jokes are in any way bad, it’s just that they’re not quite sharp enough, and the frequency of the gag rate could be a bit higher too. The cast are pretty great in general and the writing team have impressive cv’s though, so I’m definitely not writing it off just yet, but I really hope it improves soon, and quickly too.