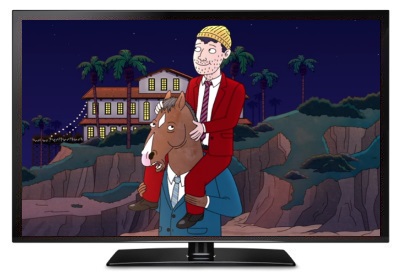 Though I was fond of the first episode of Bojack Horseman it didn’t really grab me as being anything that special, it was a vaguely amusing romp about an egotistical horse but I would never have guessed in a million years that it would develop in to the quite frankly astonishing series that it is. Tackling addiction, depression, sexuality, love and pretty much all of the big questions in life, what started as an out and out comedy became so much more layered and they managed to pull off the mixture of serious drama and absurdist comedy in an amazingly impressive way, one unlike any other show I’ve ever seen.

But before these final episodes dropped I was concerned that they might be too bleak, that the ending to Bojack’s story would be a traumatic one that saw him die in a horrendously distressing way. Fortunately that didn’t turn out to be the case, though the whole of the fifteenth episode did tease that Bojack might not survive until the end, and that bled in to the beginning of the finale as a headline suggested that our beloved horse was indeed deceased, though I doubt many would have been taken in by it due to knowing the tricksy nature of the show.

Skipping through what happened next rather quickly we’re shown how Bojack’s life has taken quite the turn as after his near death experience he was arrested and sentenced to fourteen months. Despite how upsetting this potentially could seem it’s probably the best thing that could have happened for Bojack, he’s been seeking a form of punishment for his sins over the course of the series (at least at times) and now he’s finally been given it, sure it’s supposedly for the act of breaking and entering in to his old home but he sees it at as being for pretty much everything he’s done wrong, and it’s hard to disagree given the severity of the sentence. Plus it’s also given him the chance to get properly sober too, and to give back a little by helping out with the prison’s amateur dramatics society, and that can be no bad thing.

However thanks to Princess Carolyn getting married to her assistant Judah, Bojack’s been given special dispensation to attend the ceremony and that results in the episode essentially being four conversations with the main supporting characters. So we get to witness the ever adorable Mr Peanut Butter once again show just how loyal he is to Bojack despite how the latter treats him, with Bojack seemingly finally (mostly) appreciating his old friend’s actions, even if some of Mr Peanut Butter’s prison based gags irritated him (though for the record if someone as adorable as Mr Peanut Butter said “I sentence you to life filled with my friendship” to me I’d be overjoyed), before he spends some time with Todd at the wedding reception.

Given how complex their relationship has been over the years, and how the last time we saw them together was when Todd wouldn’t allow Bojack to attend his housewarming party, I wasn’t overly optimistic that such a conversation would go well, but it shows us that Todd really has matured over the last couple of seasons. Sure he’s still passionate about his wacky plans but he also notices that Bojack’s a little overwhelmed and so makes one up so that they can have some one on one time elsewhere, it’s an affecting segment where Todd’s clearly ready to forgive Bojack, and when he explains his relationship with his mother he offers up optimism, and as was often the case, manages to be wise without realising it.

As with Mr Peanut Butter, this part of the episode is all about how Bojack is finally aware of the importance of the friendships he has in his life, and making sure that loved ones know how much he values them, and he emphasises that with his chats with Princess Carolyn and Diane. The former is an incredibly touching moment, even if it suggests that Bojack’s addition to fame may still be an issue in the future, with Bojack making a speech that lets Princess Carolyn know just how much she means to him. But unlike the first three conversations, when it comes to Diane it’s a more sombre affair as she discusses the distress he caused her when he phoned her the night he nearly drowned, and the suggestion is that however much she values the impact he’s had on her life, perhaps this is the last time they’ll ever spend time together. Then the final seconds see them appreciate the beauty of the night sky, and so despite this not being the happiest of denouements it’s at least a positive thing seeing that Bojack has learnt the importance of pausing, of cherishing what you have at that point in time, even though it might not be forever. And then the show ends, leaving a lot of unanswered questions for Bojack, albeit deliberately so, whether or not he’ll find success, or happiness, is something we’ll never know, but at least it suggests that his tale is far from over, and that he’s no longer the horse that he once was.

I’ve mixed feelings about how I feel about the ending to be completely honest, up until the part with Diane I had been enjoying it an enormous amount but the final few minutes are undoubtedly bittersweet. Over the final eight episodes the mix of drama and comedy had lent towards the former, and though that that’s necessarily a bad thing I can’t say many of them have been what you might consider enjoyable to watch, so I was pleased that this final episode mostly recaptured the mix of what makes Bojack so special, it was missing the wackiness of the show at it’s best but was at least finally funny and sweet again. Until it wasn’t, and to see that this might be the end of the friendship between Diane and Bojack was a slightly maudlin way for the show to come to a close, but I suppose it can’t be denied that perhaps it’s for the best for both of them. Bojack hasn’t exactly brought an enormous amount of joy in to Diane’s life after all, and he needs to rely on himself rather than on her.

As a whole it’s been a groundbreaking, deeply affecting and only occasionally horrendously distressing series, and one of the most intelligent and thought provoking examinations of life I’ve ever witnessed. The ridiculously over the top silliness with Todd has been juxtaposed with the some beautifully vicious satire of the showbiz industry, an exploration of what it’s like to be a career driven woman in Hollywoo (or Hollywoob, as it’ll now be known as), and also the importance of over coming your past and making up for the way you’ve treated people, and I can’t imagine they’ll ever be a series quite like it ever again. So despite my minor misgivings about how everything was wrapped up I can’t even begin to say how grateful I am that it exists, and as ultimately all of these characters are in a far, far better place at the end of the series than they were at the beginning I suppose I shouldn’t complain too much.

When I think back over the show it’s not an ending which in any way spoils what came before either, unlike shows like Lost or Dexter, and I’ll forever fondly remember the gorgeous absurdity of the farcical plots, the quite astonishing wordplay, the amazing visual gags (especially the background ones), the number of adorable and endearing characters who were sublimely portrayed by a superb cast, and the endlessly inventive imagination displayed, and how all that was attached to so many fascinating insights in to life. And while I’m still a little sad it’s over, at least it ended with what the show often did best – providing hope and optimism, and suggesting that however bad things get, there is a way to move on, to recover, or as Todd so astutely puts it when quoting the Hokey Cokey, “To turn yourself around”.