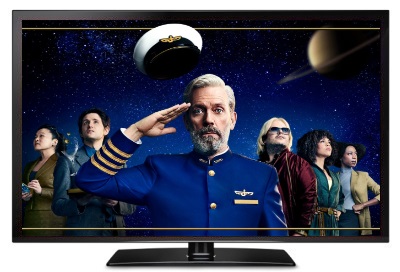 For a long time I was enormously looking forward to this latest show from Armando Iannucci, having been a big fan of The Day Today, Friday/Saturday Night Armistice, The Armando Iannucci Shows, The Thick Of It and Veep, and his co-writers Tony Roche and Simon Blackwell also have impressive comedy cvs, but then the reviews started appearing last week which suggested it was a bit of a mess. Perhaps that’s part of the reason I enjoyed it as much as I did however, as going in with lowered expectations can never be a bad thing.

I’m a little confused as to why it received such negative press though, with the BBC’s Hugh Montgomery describing it as an “Astronomic disappointment” with the main complaint being that it’s not a hard hitting satire but also not as good as Douglas Adams sci-fi work, which seems a little unfair as this is only the very beginning of the story. Admittedly it isn’t as funny as the first episodes of Iannucci’s last two tv series but it does have an awful lot of stage setting to do and spends most of it’s running time putting the pieces in place and introducing the large selection of characters. Most of them show a lot of potential too, and are fully fleshed out by the end of the first episode.

It starts with a guided tour of the luxury space cruiser Avenue 5 where we’re shown just how beautiful it is and many of the activities the ship has to offer, with Captain Ryan Clark (Hugh Laurie) just the right side of smarmy as he confidently chats to the passengers and we get to meet the main players, including a stroppy Rebecca Front and her long suffering husband, the very casual customer service Matt Spencer (Zach Woods), the egotistical and ADHD company owner Herman Judd (Josh Gad), and a couple whose marriage is falling apart around them and boy do they not care who knows it.

Everything seems to be something of a utopia until after a freak accident the gravity is flipped and bones are broken, luckily no one’s that hurt apart from one engineer who dies outside of the ship, and it looks like everything will return to normal. Of course it’d be a dull (and short) series if that were to happen, so we quickly learn that Laurie is all but a paid actor as the real ship’s Captain was rather anti-social and so hired him to serve in the role, and worse still the Captain is the one man who died in the accident. Oh, and the ship’s been knocked off course too, so what should have been a relatively short trip is going to see them take over three years to get back to Earth.

Though this opening episode is undoubtedly a little plot heavy, and it lacks Iannucci’s trademark bitchy dialogue with only a few examples of characters sparring in delightfully barbed ways, it does see him exploring other areas of humour and to me that’s no bad thing. So there’s a decent sprinkling of strong physical comedy, especially during the accident which sees the gravity flip, and it also sees a return to Iannucci’s much missed absurdist sense of humour what with throwaway lines like the Captain’s comment “They turned the moon in to a massive jail and patented the liquid glove, how hard can it be to reset a course?”, the suggestion that there should be “Fast Yoga”, and a good few other aspects of this seemingly optimistic future made me laugh considering how daft they were.

A lot of the dialogue is really great too, with Gabe Woods, as with Silicon Valley, the most valuable player here, though he’s far slicker than he has been elsewhere and so not just retreading old ground. The overly confident way he suggests “If you’re not completely satisfied, you’re wrong” and the comment about the dead astronaut “If it’s any consolation he had very few loved ones” generated big laughs within their context, and I can’t wait to see what they do with the character next.

One of my concerns was that Josh Gad might irritate, he did all but ruin Frozen II and the Billy Crystal sitcom The Comedians after all (though I suppose the writers should take some of the blame) but his arrogant and slightly delusional owner of the company is a nicely idiotic character who manages to avoid being annoying, and indeed all of the cast are on fantastic form here with Laurie, Rebecca Front, Lenora Crichlow and Suzy Nakamura deserving a lot of kudos, as does Ethan Phillips who was so fucking annoying as Neelix in Star Trek Voyager but who manages to do great work here.

Yes, there have been funnier pilots, some of the dialogue only seemed perfunctory and didn’t shine in the way that Iannucci’s scripts often do, and it needs to up it’s game if it’s going to be essential viewing that we remember for years to come as we do with the majority of comedy Iannucci has produced in his lifetime, but there’s enough going on here to suggest that could well happen, and now everything’s been set up so effectively hopefully chaos will ensue, and that it will be ridiculously absurdist fucked up and crazily funny chaos at that.