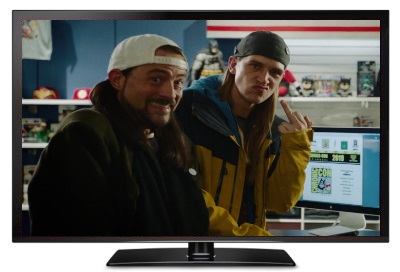 But, and ah how I wish I didn’t have to start this sentence with that word, yet I have no choice, it’s fucking awful. I wanted to laugh, I always do, but Smith has lost his ability to write original jokes and just comes up with lazy shit that others have joked about thousands of times before. And what does Kevin Smith find funny in 2019? Penises apparently, as there’s a Chicken Sandwich shop called “Cock Smoker” which characters finds hilarious instead of embarrassing, while Justin Long says early on “Seriously I’m like the Dick Wolf of getting guys off with my mouth”, and that’s just one of a ridiculous amount of plain rubbish blowjob gags.

He’s also painfully passionate about weed but makes jokes as if Cheech and Chong had never existed (despite the latter cameoing in the film), with dull stoner type conversations that even the most stoned human being in the world wouldn’t find funny. There’s also a big dose of meta humour with Mewes overacting and Long commenting “Someone wants an Oscar”, several characters ramble on about the nature of reboots and how it’s a shameless soulless cash in, plus at one point Jay comments “What kind of broken fucks want to watch this shit anyway?” and the cast turn and mug at the camera, as if this sort of self-referential fourth wall breaking had never been done before. Ugh.

Smith also mocks himself a lot, and the shit movies he’s made like Cop Out and Yoga Hosers, there’s a sod load of wanking and sex gags, cameos from people who Smith must have tricked in to appearing in the film, and depressingly the film contains a fair bit of casual homophobia, and one horribly misjudged racist moment, the joke’s supposed to be “Look at Jay saying something stupid” but that doesn’t excuse it for a second and it’s such an ugly moment that it made me actively pissed off with this shitty, piss poor excuse for a film maker.

The unsurprisingly tiresome and weak plot sees Jay and Silent Bob heading off to Hollywood to stop a remake of the Bluntman and Chronic film, and along the way they meet Jay’s daughter, which allows Smith to insert some painfully contrived dramatic elements in to the film, and he also suggests that if you grew up without a father it’s impossible to be happy. A patronising and offensive statement, it’s yet another reason why Smith is a director / human being who everyone should now ignore for their rest of their lives.

If I’m to be fair I did laugh twice, the first time being twenty three minutes in where Matt Damon has a weird and slightly forced cameo, and the second being towards the end of the movie where Ben Affleck pops up and has an amusing line involving not remembering the name of Batman’s mother, but that’s it, and two times in an hour and 45 minutes is absurdly disgraceful for what’s supposed to be a comedy. Worse still is that at times it’s incredibly tedious, and the contrived serious moments suck the tiny amount of energy the film has right out of it.

I expected a fair few of the jokes to be weak, but what I didn’t predict was the homophobia and other shitty aspects of the movie, and also just how boring it is at times. Added together it really is a fucking awful movie, and Smith has made so many terrible films back to back now that unless his next flick wins all off the Oscars and receives unanimous praise from every single other human being on the planet I’ll never watch anything he produces again.

Related Link:
Jay and Silent Bob Reboot is now out on dvd and can be bought here if you’ve gone quite, quite mad.